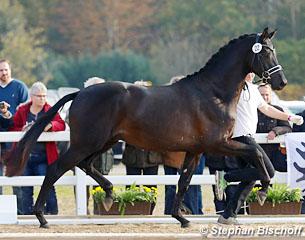 The 2017 Trakehner Licensing Champion Kaiser Milton has left the equine clinic and is now back at his new owner Burkhard Wahler's place Klosterhof Medingen in Bad Bevensen. The ownership issues are still being settled between the Trakehner society and Wahler.

Bred by A. aan de Stegge and initially owned by Jan Pieter Dalsem from The Netherlands, Kaiser Milton is by Millennium out of Kaiser's Els (by Van Deyk).

Wahler acquired Kaiser Milton at the auction following the 2017 Trakehner Licensing for 320,000 euro. However, the black stallion arrived lame at Klosterhof Medingen and was brought to the equine clinic for diagnosis. At the same time Wahler also requested restitution from the Trakehner society for the purchase price.

On 24 December Wahler announced that "after a multiple-week stay at the equine clinic the stallion is back at Klosterhof Medingen. According to the vets the stallion is no longer lame at this point and can start controled training as of January. To ensure the best road of recovery for the stallion he will daily go into the aquatrainer and is being hand walked at the Klosterhof."

Wahler added that the ownership issues have not yet been resolved. "Nonetheless as long as the stallion is with us, we will give him the best care and a proper training according to his age so that we guarantee him the best future prospect."