Robert Dover to Retire as U.S. Team Technical Advisor after WEG, New Coach to be Found 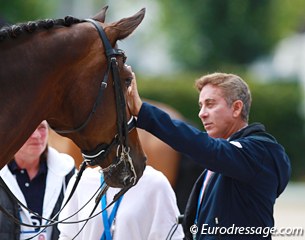 American Olympian and U.S. Grand Prix team trainer Robert Dover will be retiring from his position as U.S. Dressage Technical Advisor after the 2018 World Equestrian Games in Tryon. The United States Equestrian Federation has already started its search for a new team trainer.

USEF is accepting applications for the U.S. Dressage Technical Advisor position currently held by Robert Dover. Dover will retire following the World Equestrian Games 2018 as planned when he agreed to continue to serve in the position in 2016. Dover initially accepted the position in 2013.

“Robert’s passion and unwavering commitment to our athletes and horses has helped elevate U.S. dressage to unprecedented levels,” said USEF Director of Sport Will Connell. “Under his leadership, the program has been on an upward trajectory, returning to the Olympic podium in 2016, and it is important that his successor continues this success. On behalf of USEF, I thank Robert for his tireless dedication to the sport; he and his enthusiasm will be missed in this role. However, I know he’ll continue to give back to the sport outside this capacity.”

“It has been one of the greatest honors of my life to lead our U.S. athletes since 2013, while working with the other super coaches and fantastic staff to produce medal-winning results,” said Dover. “This team of coaches and staff are working tirelessly to produce the finest team possible going into the FEI World Equestrian Games in September. I wish to thank US Equestrian, the USOC [United States Olympic Committee], the USET [United States Equestrian Team Foundation], and everyone in our U.S. dressage community for their unwavering support and dedication to our shared goals. I will help in whatever way I can to assist in the transition as I pass the torch to someone who will continue to build our programs for sustainable success.”

It is anticipated that USEF will select an individual for this role in a timeline that will allow for a seamless transition following the end of Dover’s contract on November 30, 2018.