Florett As Passed Away 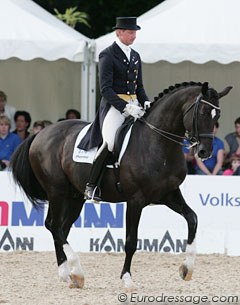 The Westfalian licensed stallion Florett As has passed away at age 20. The black stallion owned by Gestut Peterhof was euthanized as he suffered from a severe illness.

"All the caring and the veterinarian efforts did not help anymore. Out of respect for the horse and by recommendation of the veterinarians we have had to let him go,” said owners Arlette Jasper-Kohl and professor Edwin Kohl.

Born in 1997 and bred by Günter Stegemann, Florett As was by Florestan out of Unforgettable (by Urofine x Goldlack I x Pilatus).

He was licensed at the 1999 Westfalian Stallion Licensing in Munster-Handorf and did his 100-day Stallion Performance Test in 2000 in Munster-Handorf. He scored an index of 124.54 points which ranked him third out of 27 participating stallions. He had a dressage index of 136.96 (1st) and a jumping index of 103.45 points (15th). In 2007 he was approved by the Oldenburg verband.

Under Henrike Sommer, Florett As competed at the 2000 Bundeschampionate, where he finished third. The black stallion then moved to The Netherlands and was trained up to Grand Prix level by Leida Collins-Strijk.

In 2007 Florett As sold to Arlette and Edwin Kohl in Germany. He was first competed by their stable jockey Dominic Nathanael Erhart at M level then at small tour level and by 2008 at Grand Prix level. In 2009 he was briefly competed by Marcus Erkens and Arlette Kohl, before Patrik Kittel took over in the autumn that year. Kittel competed Florett As internationally for one year in 2010 at shows in Bremen, Lingen, Rotterdam, Falsterbo, Aachen, Cappeln, Frankfurt and Mechelen. The pair's last show was the national show in Munster in 2011 before Kohl's new stable jockey Eyal Zlatin took over. Zlatin showed the stallion at S-level in 2012. The horse's final competition was in Heiligenwald in July 2012. 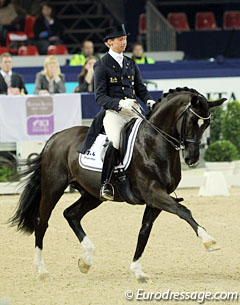 In Germany, Florett As sired one licensed son, a still nameless 2011 born colt out of a His Highness dam, bred by Stefanie Lohmann.

“Florett As was a very fascinating stallion with a strong character. Thanks to his ability of collection and his strong will to work he provided an incredible feeling to the rider," said Arlette Jasper-Kohl, who rode Florett as her schoolmaster in hi slast years. ”We will miss this extraordinary stallion very much.”