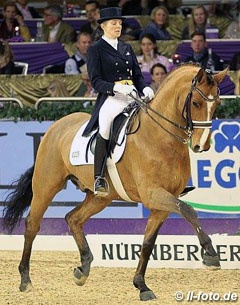 Wilson Pickett is by Wolkentanz x Ravallo x Wanderbusch II and is bred by Imke and Hinrich Saathoff. The gelding was named after the famous American R&B singer and songwriter.

Esther Maruhn and her partner Hans Richelshagen discovered the bay as a foal. Esther trained him up to Grand Prix level. He was owned by Helga Keller.

In 2011 Wilson Pickett finished 7th at the Bundeschampionate for 6-year old. In 2013 Maruhn earned her Golden Rider Badge on Wilson Pickett for 10 S-level victories. In 2014 they won the Nurnberger Burgpokal qualifier in Lübeck, and went on to finish 13th in the Finals in Frankfurt. Between 2015 and 2017 the horse competed extensively at national Grand Prix level in north Germany.

Rizvi has been competing at international Grand Prix level aboard Breaking Dawn, which was her trainer Ashley Holzer's 2012 Olympic ride. She also bought Unlimited as a second Grand Prix horse, but the Jazz offspring proved to be quite "Jazzy" in Wellington, Florida. He's now an Under 25 horse in the U.S.A. Rizvi also owns the rising Grand Prix horse Sir Caramello, which Holzer competed this year.