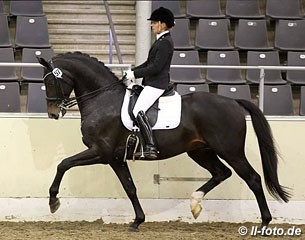 The KWPN registered Eclectisch is bred by the Andeweg family and is by Zenon x Olivi x Visioen.

Owned by Leander de Heer, he was presented at the 2012 AES Stallion Licensing, where Andreas Helgstrand bought him.

The colt moved to Denmark and got licensed with the Danish Warmblood society. In 2013 he finished sixth at the Danish Young Horse Championships under Thomas Sigtenbjerggaard.

In 2014 Eclectisch moved to Jan Brink's Tullstorp Stable in Sweden and sold to Ericsbergs Sateri AB. Ida-Linn Lundholm continued the competition career of the stallion while he was also licensed for the Swedish warmblood society. They won bronze at the 2014 Swedish Young Horse Championships.

"We are very happy with him," said Susan Pape. "In January and February we're going to the U.S.A., where we will begin competing him."