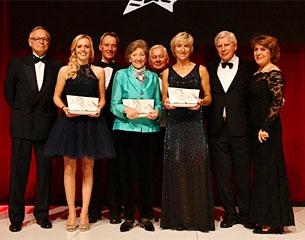 A bundle of women’s power was recognized on Saturday evening by Ullrich Kasselmann und Paul Schockemöhle with the P.S.I. Award at the See- und Sport Hotel in Ankum in conjunction with the 38th P.S.I. Auction. The Performance Sales International Award – a horse made of valuable Swarovski crystal – was given to individuals in three categories who have shown exceptional work in or around the equestrian sports.

The P.S.I. Award in the category “Shooting Star” went to the 23-year-old jumping rider Laura Klaphake, who reflected on a hugely successful show season in 2017.  She is however not a newcomer to a jumping saddle, as she collected the first of four medals in different categories for riders of the younger generation when she was just 14 years old. But even now in the Seniors division, things seem to be going well: in 2017 alone Klaphake came fifth in the Global Champions Tour of Hamburg, became German National Jumping Champion in Balve, took action in the Nations Cup in Rotterdam, placed in the Grand Prix in Aachen, and saved the best for last when she was part of the German team at the European Championships in Gothenburg earning fifth place with the German team and placed as the second best woman in the individual ranking. Sven Holenberg, sports manager of the “a young Riders Academy” praised the award winner in his laudatory speech. The “a young Riders Academy”, in which program Klaphake was accepted to in 2016, not only requires skill as a rider, but also the ability to play the role of ambassador for the sport. “Laura filled all of the criteria. She is an excellent ride, with a great presence, at the shows as well as in the media – always with a smile.”

In the sports category the former co-trainer of the German National Eventing Team Christopher “Chris” Bartle honored the award winner Ingrid Klimke. He accompanied her as trainer for 16 years and described her as especially brave, ready to help, and also as a horsewoman who shows her horses exceptional dedication and sees them as true partners. Her athletic successes speak for themselves, with participation in the eventing competition at five Olympic Games, three World Championships, and eight European Championships, at which she has collected a total of eleven medals in team and individual rankings. Bartle also used the opportunity at the P.S.I. Charity Ball to thank Ingrid Klimke for all of the great times: “I am already looking forward to seeing you at the next events and particularly the coming World Equestrian Games. You are an exemplary athlete, who always combined a wish for excellence and success – with an open and friendly relationship to everyone.”

Evelyn Haim-Swarovski, from the house of the P.S.I. Awards also spoke about the winner of the category “Life Time Achievement”. The award went to the 92-year-old former German Champion, and international judge and trainer, Maria Günther. Günther found her way to the horses as an eight-year-old – because of a card for 10 riding lessons, which was given to her by her father. During the war she mounted up again for service and worked as an interpreter, groom, and professional rider for the “Royal Horse Guards” in Menden, where she met her future husband Walter “Bubi” Günther. In 1963 the couple succeeded in winning two German Championship titles. After 1974, the year in which she lost her husband, Günther reached many Grand Prix successes with his horse Macbeth, before she moved over to the judge’s booth. She was faithful to Aachen for more than 50 years as a jumping and dressage rider, and then for 10 years as an international judge. “Today she is a woman of a ripe age. In eight years she will become a living legend of a century. She has a rider’s personality, and with the help of the horses and her never tiring commitment to the sport, she has succeeded in maintaining her youthful vigor and mental sharpness", said Haim-Swarovski in honor of her life achievements.