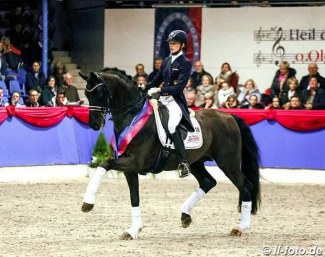 Fürst Wilhelm has been honoured with the VTV Stallion of the Year title at the 2017 Oldenburg Stallion Licensing in Vechta, Germany, on Saturday 18 November 2017.

The 11-year old Oldenburg licensed stallion Fürst Wilhelm is by Furst Heinrich out of Lady Scarlett (by Sandro Hit x de Niro). He is bred by Wilhelm Meiners and owned by Gestut Sprehe. Under Kirstin Biermann, he booked his first success at Prix St Georges and Intermediaire I this year.

Fürst Wilhelm was licensed in Vechta in 2008 and sold to Sprehe at the auction. As a 6-year old he finished sixth at the 2012 Bundeschampionate under Lukas Fischer. Biermann took over the ride on the stallion at the end of 2016.

Fürst Wilhelm has sired 6 licensed sons so far, amongst them the reserve licensing champion Furst William HC, who went on to become regional and national young horse champion. At the 2015 Oldenburg licensing Fair Game stood out. The liver chestnut Festivo got licensed in Westfalia and in 2016 Frascino was approved in The Netherlands.

The Fürst Wilhelm son Furtwängler sold for 135,000 euro at the Vechta auction and he won silver at the Spanish Young Horse Championships under Juan Antonio Pérez Pulido.