The Shaping of Piaffe and Passage by Fashion, History and Genetics: Part II 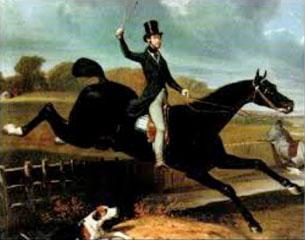 Part I: The Historical Roots of the High School Movements

THE OLD WORLD ENDS IN THE TURMOIL OF THE FRENCH REVOLUTION

While France was engulfed in the Revolutionary torment of 1789 and the rest of monarchic Europe declared war on her, Portugal survived in a reasonably peaceful mode. In 1806, Napoleon invaded the Iberian Peninsula while the British defended Portugal against the French. Unfortunately, defenders and aggressors destroyed a great part of the equine population in both countries. The Prince Dom Joao was exiled in Brazil and could not protect his cherished Alter horses. As a result of all those political changes, the Baroque tradition disappeared. Piaffe and passage slowly lost their importance as equestrian goals in most of Europe, except in the heart of people in Spain and Portugal who kept on breeding the baroque horse they loved and showcasing his ability at country fairs.

French aristocrats, fleeing the guillotine, established themselves in Germany, Holland and England, taking along their horses, their riding masters, and the practice of high school. The incessant wars during Napoleon’s imperial adventure ushered the start of a simplified form of horsemanship strictly designed for military purposes around few parameters: teaching many recruits rapidly, training an ever-changing remount (both were often killed in incessant wars) and charging the enemy as heavy, rather than light, cavalry. The disappearance of court entertainment announced the end of artistic riding at the School of Versailles. The end of opulence for the Spanish and Portuguese Empires and the ravages of war nearly destroyed the baroque horse at his source. Napoleon sparked a renewed passion for the Arabian horses he brought back from Egypt before his defeat at

Waterloo marked the beginning of England as a new world power that foisted Thoroughbreds, flat racing and steeple-chasing to admiring nations. In France, the Count d’Aure, a classically formed rider and the last chief equerry of the Versailles School (where equitation was an art form), became a proponent of cross-country riding. He later became Saumur chief rider and laid the principles of equitation as a sport.

THE SPANISH RIDING SCHOOL, STEWARD OF THE BAROQUE SURVIVAL FOR THE NEXT 150 YEARS

The Austrian Hapsburg family reigned over the Holy Empire that comprised Spain, Burgundy, Holland, Austria, Hungary and a part of Germany, notwithstanding the American colonies. In 1556, Charles V divided his empire, leaving Austria to Ferdinand and Spain to Philip II. This long-lived Spanish king created one of the greatest breeding projects in history by establishing the Pure Spanish Horse (PRE) in his stud of Cordoba. In 1562, Maximillian II brought the Spanish horse to Austria and founded the court stud at Kladrub (still in existence in the Czech Republic). His brother Archduke Charles established a similar private imperial stud farm with Spanish stock in 1580 at Lippiza near the Adriatic Sea. These establishments and the Spanish Riding School of Vienna served exclusively for the needs of the Imperial family until the establishment of the Austrian Republic in 1916. 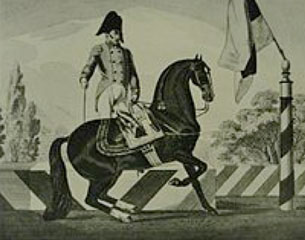 At a time when equestrian fashion had completely changed in Europe, Max Ritter von Weyrother was first a rider, then the director of the Spanish Riding School in Vienna between 1814 until his death in 1833. Formed in the French equestrian tradition, this remarkable man’s reputation reached well over the borders of Austria. A famous painting shows his brother Gottlieb teaching the levade in hand by keeping his horse walking near a platform he stood on, maintaining his height advantage without putting any weight on the horse’s back. He also recommended the use of draw reins to his students but later regretted it. Amongst his most prominent students were Louis Seeger, who became the mentor of Gustav Steinbrecht, considered to be the father of modern German horsemanship.

Steinbrecht became a link between the baroque age and the modern era by advocating the development of the gaits as we understand them today in the training of dressage horses. Basing himself on the spirit of La Gueriniere’s shoulder-in, he focused on the lateral flexibility of the spine, which was a biomechanics concept ignored by all authors until then. Weyrother’s strong personality helped the Spanish Riding School persevere as the only formal institution of the baroque tradition in Europe. It later survived both World Wars and the annexation of Austria by Germany. Thanks to the efforts of Alois Phodajsky (and the role of the US Army in saving it), the Spanish Riding School re-emerged in the twentieth century as a beacon of light and a major presence in the modern equestrian landscape, particularly through its influene on German and British horsemanship (through teachers like Watjen, Von Neindorff, Hoyos, Robert Hall, Kottas, Bachinger, Hausberger, Kritsch, etc.).

THE NAMING OF PIAFFE AND PASSAGE

The etymology of piaffe and passage (and of most other equestrian terms, such as appuyer, courbette, parade, levade, cabriole (or capriole),croupade or ballotade), is truly Italian, just like their historical origin. The words “de piede fermo” mean firming one’s feet and were used in the context of “trotting on the spot.” They were later transformed phonetically and shortened to ‘pie-fer’, which became piaffer in the mouth of the French students traveling to Naples to learn the new art. In the same vein, passegiatta (passegi) became passage and means taking a leisurely and stylish walk. Since the seventeenth century, these movements have been known by their French spelling because at that time France exercised a considerable cultural, political and equestrian influence on the rest of Europe. French was the educated language of most European courts as far away as Prussia and Russia and the official vehicle of diplomacy. As a result, the cream of European aristocracy seriously interested in horses came to study at the Royal Academy at the Palace of Versailles near Paris and took all the French jargon back with them when they returned home. The English later adopted the derivative German spelling: piaffe. The French Passage remained unaltered in all languages, including German, Spanish, Portuguese, and modern Italian.

THE MANY PURPOSES OF PIAFFE AND PASSAGE SINCE THE BAROQUE TIME

The social and moral value of collection became the new purpose of horsemanship: Because jousting had been banned in France in 1559 after the accidental death of King Henry II, aristocrats were looking for another way to prove, not just their valor, but also their superior education, through a social pastime that made them appear above the common people. The horsemanship techniques brought back from Italy led to the dominant use of the piaffe, obtained in the double pillars, as the preparation for all the airs-above-the-ground that imitated the myth of the “Flying Pegasus.” It gave aristocrats the opportunity to establish their social and moral superiority over the rest of society. Pluvinel, writing in the same vein as King Duarte of Portugal two centuries earlier, explained in his famous “Instruction of the King in the Exercise of Riding Horses” both the technical improvements made in the way of training horses, as well as the moral precepts derived from the practice of horsemanship that could benefit the education of a prince. 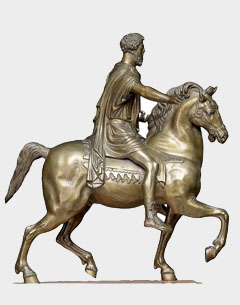 Political Pedestal: From Antiquity until the twentieth century, parades were frequent functions of political and military life. Leaders needed horses capable of gaits that were animated and majestic, slow enough so the chief could stay longer in front of the troops or the public from whom he wanted to impress. Piaffe, passage and terre-a-terre (a very collected and elevated canter in which both front legs and both hind legs move nearly simultaneously) corresponded exactly to the requirement of the parade and were the favorite poses used for official equestrian portraits. These movements also happen to be easy to sit, hence their even greater favor with riders who preferred to maintain their elegant posture rather than appear worried about their balance in the saddle. Roman emperors of Spanish origin, Trajan, Hadrian and Marcus Aurelius are represented on prancing Spanish horses.

In the late 1500s, Philip II of Spain developed his own superior strain of Spanish horses, both active and obedient, mainly for the purpose of serving as his parade mounts. Spanish horses of the better castes became fundamental props used in the whole of Europe to display the majesty of the absolute monarchy that was the political European system of the Baroque period (sixteenth to eighteenth centuries). The effortless domination of a “wild stallion” served as a political metaphore for the domination of subservient populations to a benevolent monarch. 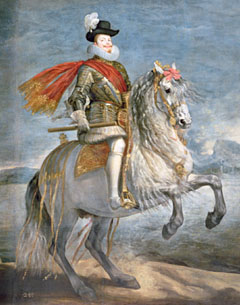 The French master Francois Robichon de la Gueriniere best expressed the equestrian priorities of the times: "Equestrian authors have given unanimous preference to the Spanish horse, and have considered him to be the best for the manege work because of his agility and the strength of his hind legs, combined with their elasticity. His natural cadence and pride make him the first choice for the pomp of the parade where he can display his grace and his nobility. His courage, combined with utmost docility, is the foremost requirement for war on a day of battle.” It must be noticed that Spanish horses were extremely difficult to obtain and may have been ridden in battle by a king, but not by regular cavalrymen involved in the fighting action. As noted by the Duke of Newcastle, High School jumps (reserved to well trained, expensive horses) were never used in battle, because no horse that walked for 3 days on the road is ever going to be willing to do a cabriole.

Each period of history has its own favorite breed of horse for the specific purpose of that time. The style in which that breed moves ends up becoming the model for whichever movement it is genetically predisposed. Iberian horses have defined the collected movement to this day - piaffe, passage, pirouettes - for every other breed that attempts to perform them in their perfection. The sitting piaffe riders seek to achieve, hocks flexed, knees on the horizontal, neck erected, corresponds exactly to the way Iberian horses interpret the movement. It is interesting to notice that leading dressage breeding nations (Germany, Holland, Denmark, Sweden) use to select horses strictly on the basis of the amplitude of the gaits. They are now thinking about collection and piaffe as basic qualities of the dressage stallions. Modern sport horses are now inching ther way towards the breed standard of the Lusitano and PRE (square frame, uphill balance, knee action, quicker tempo in the trot). The leading seller of dressage horses, PSI, shows all young horses in a piaffe in hand presentation that is a fundamental deciding factor for international buyers.