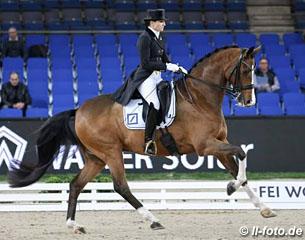 Klössinger and her 12-year old Baden Wurttemberger bred Daktari (by Donautanz x Carpaccio) won team and individua gold at the 2017 European Under 25 Championships in Lamprechtshausen, Austria, in the summer and was the hot favourite for gold at the Nationals as well.

Trained by Rudolf Zeilinger, Klössinger won the warm up round in Stuttgart with 72.512% and in the actual Finals, determined by the scores achieved in the classic Grand Prix test, she bested the field with a clear point advantage. Her score of 72.140% made her the undoubted winner of the 2017 Piaff Forderpreis Finals.

"Firstly I'm very happy. We haven't ridden that mant Grand Prix tests. The demands are of course greater and today we were able to state that it went as well as yesterday," said the 24-year old Klössinger. "It was important for us to show more security in the Grand Prix. And we were able to show that." 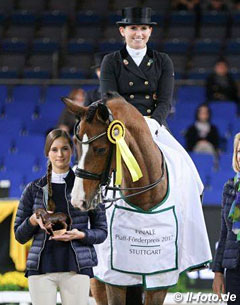 German Under 25 team trainer Sebastian Heinze added that "Lisa and Daktari were an excellent pair in the Piaff Forderpreis this year. They won practically all tests, as well as the team and individual European title. It is fun to co-experience this successful season and I'm excited where the road will take them."

Lisa, who has a Bachelor in sport and event management from university in Munich, has been riding Daktari for six years. "The transition to Grand Prix was a bit difficult and went with bumps until we got there. The road to Grand Prix went via the "Stars von Morgen" circuit and then the Piaff Forderpreis," she explained. Klossinger explained that after winning medals at the 2014 European Young Riders Championships and because of the difficult road to Grand Prix she experienced a burn-out and no longer had an appetite to compete. She sent her horse to Rudolf Zeilinger to be sold, but he convinced her to give Daktari another chance. After eight weeks in training with Zeilinger, the horse had transformed and Klossinger picked up the reins again, with all the tremendous success in 2017 as a result. 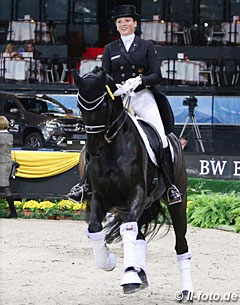 The runner-up in the 2017 Piaff Forderpreis finals was Florine Kienbaum on the Hanoverian bred Doktor Schiwago (by Don Frederico x Weltruhm). The pair was not selected on the German team for the European Championships, even though they won team gold at the inaugural 2016 European U25 Championships. In Stuttgart they were twice second. They got 70.395% in the warm up round and 69.060% in the Finals.

The three other team members that represented Germany at the 2017 European Under 25 Championships were Bianca Nowag, Juliette Piotrowski and Ninja Rathjens. Nowag finished fourh in the Piaff Forderpreis Finals with 66.700%, Piotrowski had to withdraw her Sir Diamond (by Sandro Hit x Rubinstein) right before the Finals because of an infection and Ninja Rahtjens did not qualify. 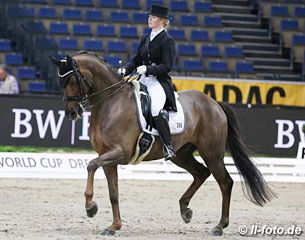 Monica Theodorescu, German Grand Prix team trainer, was pleased with the results achieved by the finalists. "We want to guide the young riders on the road to Grand Prix. Here they can get experience and learn to measure themselves amongst peers. The show circuit takes place at very good shows with top judges, like at the German Championships in Balve. There the participants can watch the buy guys, such as Isabell Werth or Hubertus Schmidt, at work in the warm up. We have the Piaff Forderpreis now for 16 years. It has proven its value and it has become an integral part of our training system. Many team riders such as Kristina Broring-Sprehe came from this circuit."