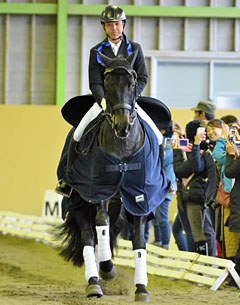 The Japanese Grand Prix championships included three rounds: the Grand Prix which counted as qualifier for the Special for those combinations scoring over 58%. The ten highest scoring pairs with a combined score of the Grand Prix and Special, were eligible to move on to the Freestyle final. The Kur ranking determined the final ranking for the Championship.

The 29-year old Toshiya Kawabata is a new comer on the scene. He did his first international at small tour level in Tokyo in 2016 aboard Masumi Shimoda's 17-year old Dutch warmblood Tetinger (by Munchhausen x Clavecimbel) which was previously shown by Shingo Hayashi. This year Kawabata also took over the ride on Hayashi's Grand Prix horse Ramses der II, a 19-year old Dutch warmblood by Gribaldi x Esteban. Ramses is owned by Tshunehiro Shimoda and was Hayashi's Olympic hope in 2016 but the pair did not make it on the team. Kawabate rode his first international at Grand Prix in Gotemba in October and placed second twice. 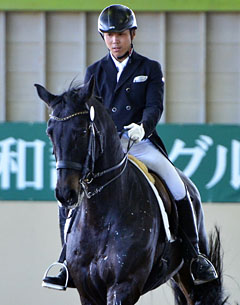 At the Nationals in Gotemba, of which the freestyle was judged by Mariko Tsukigawa, Junichi Hiraoka, Minako Furuoka, Kiyo Ogwawa, and Seiji Yoda, Kawabata scored his first significant Grand Prix title in his young career. The pair earned 68.850% and stayed well ahead of the silver medalist, 39-year old Ryuma Hieda on Bravissimo. They scored 67.275% for second place. The 35-year old Naoko Hieda and Akane Kuroki's 16-year old Oldenburg gelding Don Luka (by Don Larino x Cassini) earned bronze with a 67.200% kur score.