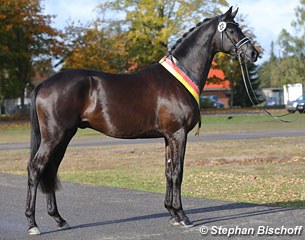 Burkhard Wahler of Klosterhof Medingen has restituted the 2017 Trakehner Licensing Champion Kaiser Milton after the stallion was confirmed  lame at an equine clinic.

Bred by A. aan de Stegge and owned by Jan Pieter Dalsem from The Netherlands, Kaiser Milton is by Millennium out of Kaiser's Els (by Van Deyk). Wahler acquired Kaiser Milton at auction for 320,000 euro to ensure Trakehner blood at his stallion station Klosterhof Medingen after the passing of Herbstkonig.

"Unfortunately the horse arrived lame at Klosterhof Medingen," Wahler told ST.GEORG. "We brought the stallion to the clinic for further diagnoses. As a result we had to restitute him."

The Trakehner society confirmed that the stallion has officially been restituted by Wahler. "He is still under veterinary care. This is a pending process as the veterinary investigations and diagnoses are not yet concluded, so there is no further information at this point.