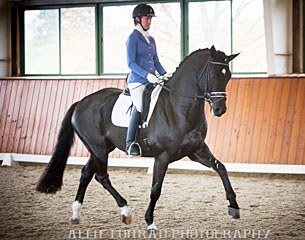 The guest judge riders were Marion Ostmeyer for the jumpers and  Jessica Wisdom for the dressage stallions.

Seven dressage stallions in total participated and one was withdrawn. Six stallions finished the testing and five of them actually passed with sufficient results.

The dressage high scorer of the U.S. testing was Alice Tarjan's Dutch warmblood bred Harvest (by Connaisseur x Ulft x Able Albert xx). He scored to total of 8.61 points. He got 9 for trot, 8.8 for canter, 8.0 for walk, 8.5 for rideability and 9 for overall impression.

Tarjan told Eurodressage that breeding will be secondary in Harvest's career. "I may stand him on a very limited basis next year but I really want to concentrate him on sport," said Alice. "My hope is to try to qualify him for US young horse championships next year."

The second highest scoring stallion was Five Rings Farm's 5-year old Oldenburg bred Boreas FRF (by Bordeaux x De Niro x Rubinstein), who scored a total of 7.92 points. He earned 6.8 for trot, 8.2 for canter, 9 for walk, and 7.8 for rideability and general impression. Boreas was the 2015 Oldenburg Saddle Licensing Champion in Vechta, Germany. At the auction following the licensing he sold for 140,000 euro to Five Rings Farm.

Maryanna Haymon's stallion Debonair MF (by Doctor Wendell II MF) scored 7.89 points. This stallion got 7.8 for trot and canter, 8 for walk, 7.9 for rideability and 8 for general impression.

Michael Yates' Hanoverian bred Donarsong GGF (by Donar Weiss GGF) failed the testing with a total of 6.92 points. Unfortunately the stallion struggled with the trot, rideability and general impression, not going over 6.8 for those criteria. The passing score is 7.5.

Dante's Diamond (by Dante Weltino x Dimaggio), bred by Bommerten in Germany and owned by Cashel Farms, was withdrawn from the testing.