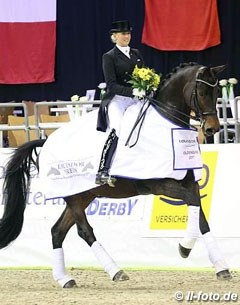 With the conclusion of the 2017 CDI Oldenburg, the finalists for the 2017 Louisdor Cup Finals are known. Six qualifiers were held during the 2017 outdoor show season to determine the twelve horses that are eligible to compete in the Louisdor Cup Final, which is the German Championship fro Developing Gran Prix horses.

The qualification season kicked off at the Horses & Dreams CDI Hagen competition in April where Frederic Wandres and Duke of Britain won the class. The circuit then moved to Wiesbaden, Heroldsberg, Schenefeld, Darmstadt and Oldenburg.

German FN registered horses aged 8 to 10 are eligible to compete on this circuit, which originally started in 2007 as the HKM Cup, then it became the Medien Cup, and one year it was the Tesch Inkasso Cup before turning into the Louisdor Cup.

The 2017 Louisdor Cup finalists are: