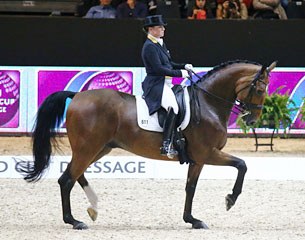 Where sport meets entertainment that’s where you find the world’s best Dressage riders and those two planets collided today to explosive effect at the second leg of the World Cup Dressage 2017/2018 Western European League in Lyon, France where reigning champion, Germany’s Isabell Werth (47), came out on top. In a competition that built to a thrilling climax it was Spain’s Beatriz Ferrer-Salat who finished second ahead of Sweden’s Patrik Kittel in third while Werth’s compatriot, Dorothee Schneider, lined up fourth.

Werth had to settle for runner-up spot with Don Johnson at the first leg in Denmark two weeks ago, but today, partnering the 11-year-old gelding Emilio, she threw down an unbeatable mark of 86.115 percent when fifth-last to go of 15 starters from eight different countries.

From the moment they danced into the arena the German duo had the audience completely spellbound. To a gloriously classical musical score they demonstrated dramatic changes of rhythm and pace, and it was captivating from the very start to the perfect final halt. It was no surprise when they were awarded three artistic scores over 90 percent including 92.800 from Judge at E, Vincenzo Truppa from Italy. All five members of the Ground Jury were in agreement as they put them in pole position, and as they left the arena the spectators rose to their feet to salute the lady whose medal-winning record in equestrian sport is second to none. But the excitement was far from over.

Ferrer-Salat’s Delgado put 82.630 on the board as the four-time Olympian and 2015 European silver medallist showed that her 16-year-old horse is coming right back on form after the injury-break that followed the Rio 2016 Olympic Games. And then Kittel set the arena alight with one of his trademark electrifying rides. This ultimate showman and his Olympic partner, the 13-year-old mare Deja, simply swung to the funky sounds of Stevie Wonder, all but willing the crowd to sing and clap to the strains of “Isn’t she lovely”, because Deja most certainly is. The wait for the judges marks was a tense one, but 81.555 wouldn’t threaten Werth’s domination and when fellow-German Dorothee Schneider and the elegant Sammy Davis Jr posted 80.315 for fourth place it was a done deal.

Werth was delighted with Emilio today. “He has become so much more confident, even in the warm-up he was focused and concentrated, he’s becoming more professional and improving all the time” she said. And now she plans to bring out her top ride, the brilliant mare Weihegold who helped her take the 2017 World Cup Dressage title last March and triple-gold at the 2017 European Championships this summer, to the next leg of the Western European League which will take place on home turf in Stuttgart, Germany in two weeks’ time. Following that she will compete in Amsterdam, The Netherlands in January and she intends to campaign all three of her horses ahead of the series Final in Paris, France next April even though she is automatically qualified as defending champion.

Kittel meanwhile is sitting pretty at the top of the league table going into the next round with 54 points, a whopping 23 points ahead of second-placed Marcela Krinke Susmelj from Switzerland who finished seventh today with Smeyers Molberg. “I’m over the moon about being so far ahead!” Kittel said this evening. “And my goal is definitely Paris - it’s going to be awesome!” he added.