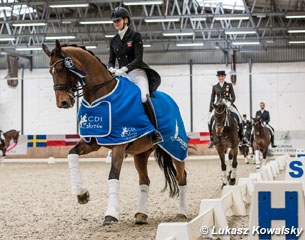 Danish Malene Kohlschmidt Ebbesen and her Danish warmblood Mira persevered in World Cup qualifier at the 2017 CDI-W Zakrzow in Poland on 26 - 29 October 2017. After placing second in the Grand Prix, Ebbesen upped the ante in the Kur to Music and topped the leader board for the World Cup victory in this Eastern European league event.

The Grand Prix field included 14 riders from across Europe as well as German based Australian Kristy Oatley. Only eleven pairs moved on to the freestyle.

German Uwe Schwanz and Hildegard Riedmaier's 9-year old Bavarian gelding Hermes (by Hotline x Lanciano) made his international Grand Prix debut in September and after gaining mileage at the CDI's in Lamprechtshausen and Donaueschingen, he showed good form in Zakrzow, winning the Grand Prix with 71.060% and placing third in the Kur with 72.675%.

German based Danish Malene Kohlschmidt Ebbesen and her 17-year old Danish bred Mira (by Michellino x Cavan) were second in the Grand Prix with 69.320% and won the freestyle with 73.775%, edging out Polish Katarzyna Milczarek on Dzeko (by Dimaggio) with 72.900%. Ebbesen has campaigned Mira at the CDi's in Nieuw en St. Joosland, Compiegne, Hammaro, and Falsterbo this season. 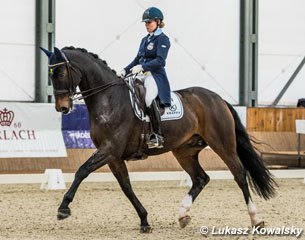 "Mira was a star. I'm so proud of him," said Ebbesen. "In times like these I think a lot of my beloved grandfather, who bought me this horse 13 years ago before he passed away. He would have been so proud."

At small tour level Swedish Charlotte Haid Bondergaard ruled the roost and won all three tests aboard the 10-year old Hanoverian gelding San Andreas (by Sandro Hit x Walt Disney). The pair scored 71.474% in the Prix St Georges, 70.526% in the Intermediaire I and 71.167% in the Inter I kur to Music. Haid acquired San Andreas in September 2016 as a Tokyio Olympic hopeful.