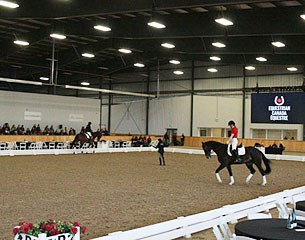 The enthusiastic crowd received focused education from many of Canada's top international presenters including:

The morning arena sessions showcased riders from the second and fourth levels. Hanson-Boylen, Whitham and MacDonald educated participants on the proper scale of training and perfecting their test riding to maximize scores in the ring.

“What a fantastic learning opportunity for those that were riding and those that audited the symposium,” said Melanie Thomson, who rode at second level with Anna May McCloskey’s eight-year-old Hanoverian gelding, Gatsby. “The live scoring of the movements as they were preformed gave a rare insight into the thinking behind the scores given, what the expectations are for the level, and quick and simple changes that could be made to increase the mark.” 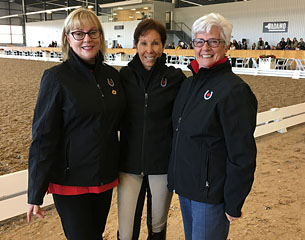 “It’s easy to miss the little things at home and ride to where you’re comfortable,” said Lynsey Rowan, who rode the second level test on her horse Orion GS (by Grand Passion x Prince Thatch XX), an eight-year-old Trakehner gelding. “Riding in a symposium like this, you’re pushed to ride more accurately.”

“It was an incredible opportunity to get coaching and feedback from two of Canada's top judges and one of Canada's top trainers, all at the same time,” said Laurel Adams, who rode at fourth level on Anita Berkis’ 14-year-old Oldenburger gelding Daegan, sired by Diamond Hit, in the morning arena session. “It was wonderful to work with and watch so much talent in one day.”

“The format made it really easy,” said Megan Shea, who rode on Stephen Shea’s 13-year-old Oldenburg gelding, K2 (Kaiser Franz x Argentinius). “When you work with one coach all the time you have one perspective, so it is really helpful to work with Christilot, and to have the perspective of various judges.”

Participants were also treated to a special performance from Canadian Olympian Jacqueline Brooks, astride her Olympic mount D Niro (D-Day x Napoleon 625), an18-year-old Swedish Warmblood (affectionately known as Goose). The pair performed to The Sound of Silence by Simon and Garfunkel, the same moving performance that captured third place at Dressage at Devon in late September. This marked just the third time the pair has performed the freestyle in front of a live audience. A critical component to a freestyle performance is the eyes and ears of a music designer. Williamson joined Brooks in an interactive discussion on how exactly The Sound of Silence came to be.

The afternoon included both arena and classroom seminars on Massage Therapy, Performance Analysis and Fitness for the Equestrian.

“It used to be, if you could make it through the Prix St. Georges, you would get a prize,” said Elizabeth Steacie during the Performance Analysis session she presented with Dilliott. “Nowadays, that’s not the case. We have a lot of very competent trainers and high performance riders, but we also have many people who are adult amateurs who are good riders with good horses. That thrills me, to see so many people acquiring the skills and getting out there and showing well.” 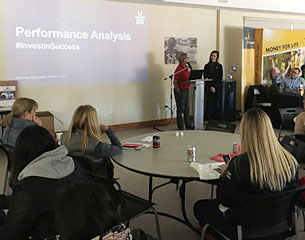 “The symposium offered an opportunity to update knowledge, skills, and attitudes that are important to coaches, riders, trainers, judges, sponsors, and supporters,” said Daisy Kosa, Symposium participant. “The importance of a rider to facilitate a horse being able to stretch in a stable connection and balanced rhythm was a key takeaway for me.”

“Message therapy is so important for high performance horses because they have to be supple all the time,” said Caroline Archambault, CET Massage Therapist. “Especially in dressage - with regularity, rhythm, suppleness, and consistency - if their muscles are tight and sore they won’t be able to achieve that.”

The day concluded with a productive town hall discussion with the EC Dressage Committee. The goal of the Town Hall was to present information on various projects and programs and gather feedback on existing programs as well as suggestions for future initiatives.

“We were thrilled with the positive engagement of those in attendance. It was a great discussion that led to a number of suggestions which will be reviewed and acted upon by the Dressage Committee over the coming months,” said Victoria Winter, Chair of EC Dressage Committee. “The Town Hall is an event which we will look to hold on an annual basis. In our view, the best way to move forward as a sport is to continue to engage the community and we encourage our members to contact us throughout the year with comments and suggestions.”

“It’s been a wonderful day. It’s been really nice to have everyone together for a learning opportunity,” said Jorden MacLean, Symposium participant. “I’m looking forward to seeing this type of opportunity progress into something more cohesive and more directive towards the grassroots programs.”

“What an amazing symposium,” said Sue Carr, Symposium participant. “Lots of pearls of wisdom to take home. Thank you for making it happen.”

With sights set on Canada’s west coast, the 2018 Dressage Levy Performance Advantage Symposium preparation has commenced for British Columbia. Recognizing the sheer amount of interest in Ontario alone, a one-day event might again appear on the East Coast calendar for 2018.

Text and Photos by Equestrian Canada