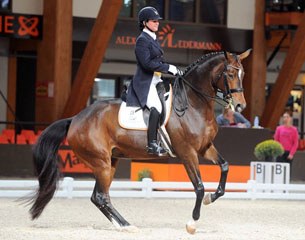 A few times American Grand Prix rider Catherine Haddad-Staller has come close to getting selected on the U.S. team for a major championship, but she always ended up the bridemaid. With her new horse Semper Fidelis she probably succeeded in catching the attention of the U.S. selectors after promising plus seventy percentage scores at the CDI Darmstadt and Le Mans.

Catherine Haddad is no unfamiliar face to the European show scene. She has been based in Germany, with her business for twenty years, before moving back to the U.S. in 2011 after marrying her veterinarian husband Greg Staller. After several seasons in Florida, Haddad decided to spend the summer and autumn of 2017 back in Europe and is based at Bernadette Brune's yard in Westerstede, Germany.

For the past two an a half years Haddad has been sponsored by American Rowan O'Riley, who purchased the now 11-year old Oldenburg mare Semper Fidelis (by Sir Donnerhall out of World Lady (by Welt Hit II)) at Andreas Helgstrand's yard in 2016 after swapping her Grand Prix mount Hotmail.

Bred by Helmut Plümer, Semper Fidelis was originally named Sue. As a youngster she was owned by Klaus Gustenberg and she qualified for the 2009 Oldenburg Elite Mare Show in Rastede and finished in the Brilliant Ring. Italian Gloria Colombo bought Sue from Gustenberg after receiving a top of her then trainer Christoph Koschel. Colombo and her current coach and partner Riccardo Collecchia trained her to FEI level and competed her up to small tour level in Italy, before deciding to sell her.

Colombo initially sent Sue to Germany to be sold but later on moved her to Helgstrand's yard for some more Grand Prix fine tuning. Under Thomas Sigtenbjerggaard, Sue was competed twice at M-level at two local shows in Denmark in April 2016, winning the two classes with 75.128% and 73.375%.

"It was a hard decision to sell such a great mare, I say a once in a lifetime horse," Colombo told Eurodressage. "She's a Ferrari and now I'm happy that she found a super rider and a top team. She deserves everything! At Andreas they did a great job. It took a little bit of time finding the 'perfect' rider who could fit Sue but at the end we succeded." 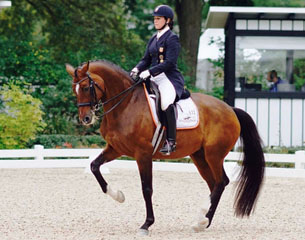 American Rowan O'Riley bought Sue for Catherine to ride and rebranded her into Semper Fidelis. Haddad made her return to the CDI ring after an 18 month hiatus. They had a very successful CDI Grand Prix debut at the CDI Darmstadt in September, where they scored 72.240% in the Grand Prix for fourth place and 71.725% in the Special for fifth place. At the 2017 CDI Le Mans on 20 - 22 October the pair was second in the Grand Prix with 72.400% and they won the Special with 71.902%.

"Semper Fidelis is very green for her level of competition so I am really thrilled that she is doing so well," Haddad told Eurodressage. "Both of the shows I rode with her, Darmstadt Kranichstein and Le Mans, were simply experiments to see how she would react in the horse show environment. I'm very impressed by her ability to focus and stay with me in the arena."

Catherine does not like to call the 2018 WEG a goal set in stone.

"It's really too early to talk about major competitions with such an inexperienced horse. She has incredible quality. She is very, very special. So for me, such a horse deserves time to develop at a relaxed pace without a lot of pressure. We have a strong mind-to-mind connection so I am sure she will let me know when she's ready for the big time! I feel very lucky to ride this extraordinary horse every day."