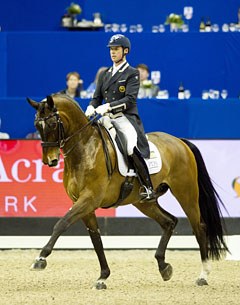 Dressage legend Carl Hester is set to take centre-stage alongside a stellar line-up at this year’s Liverpool International Horse Show. A new addition to this exciting festive and New Year equestrian finale, Carl will ride the hugely talented and much-admired Hawtins Delicato in the Inter 1 Freestyle class on the Friday evening.

Hawtins Delicato was the ride of Charlotte Dujardin, when winning the Inter 1 at Bolesworth International in 2016, the Future Elite Championship at HOYS the same year and more recently the Inter 2 Championship at the British Dressage National Championships in September.

Carl is yet to compete the attractive 9-year-old, bay gelding - jointly owned with long standing supporter Anne Cory - that has caught plenty of attention in the dressage arena.

Said Carl: “To have dressage at the Liverpool International Horse Show is very exciting and I am very much looking forward to competing Hawtins Delicato at the Echo Arena. As the sport has grown competitors in the world of dressage are very fortunate to have so many more prestigious shows and venues to compete at and it is great to add Liverpool to the calendar.”

An international line-up will dance the night away to their chosen music at what looks set to be a brilliant evening performance on December 29.

Liverpool International Horse Show President, Nina Barbour said: “We are delighted that Carl and Hawtins Delicato will be competing at the show.
“Dressage is new to the timetable and attracting such a well-known international star as Carl is fantastic for the event.

“The Echo Arena is a brilliant venue and there will certainly be plenty of atmosphere to give the crowd a real taste of top class dressage, showcasing some of our best riders, as well as up and coming equine stars of the future.”

Hospitality at The Liverpool International Horse Show is second to none and makes a fantastic present for great friends and family. Whether on the purpose-built platform at the head of the arena or in one of the VIP boxes – you won’t be disappointed.

This year’s Liverpool International Horse Show will see a host of leading names in action from December 29 to 31, at The Echo Arena on Liverpool’s iconic waterfront.

To reserve VIP Hospitality tickets on the purpose-built stage at the head of the arena please contact Hospitality Manager, Melanie Simm on +44 1829 307676 or email melanie@bolesworth.com.