Desperados Back in Training, 2018 Show Schedule to be Planned 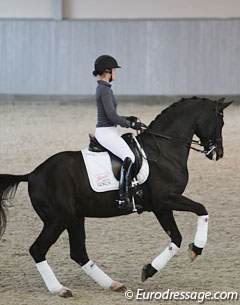 Kristina Bröring-Sprehe confirmed to Eurodressage that her number one Grand Prix horse Desparados FRH is back in light training, having recovered from an injury that kept them out of the 2017 show season.

When the German equestrian federation announced Desperados' withdrawal from European Championship team selection due to an injury in May 2017, rumours ran rampant that the injury was career ending.

Desperados' last show was the 2016 CDI-W Stuttgart in November 2016, where he finished second twice behind Isabell Werth on Weihegold. At the 2016 Olympic Games in Rio, the pair won team gold and kur bronze.

Sprehe and her 16-year old Hanoverian stallion by De Niro x Wolkenstein II missed the season kick-off, the 2017 CDI Hagen, and in May it was announced that the stallion would need five months off due to an injury.

Sprehe now confirmed the horse has recovered and is back in light work, but clear show plans for 2018 have not yet been made. The pair has always skipped the indoor world cup circuit.

"Desperados is doing really well. He's back in the build up phase of his training and is feeling very well," Bröring-Sprehe told Eurodressage exclusively. "This year we'll still go slow as the season has ended anyway. We'll decide in agreement with the team trainer when to plan the first show. So it will be full focus on next season."

Bröring-Sprehe was not entirely absent from the show ring. She competed her newly acquired 8-year old Oldenburg gelding Destiny OLD (by Desperados x Sandro Hit x Argentinus) at small tour level at the CDI's in Aachen and Darmstadt and nationally in some Nurnberger Burgpokal qualifiers.