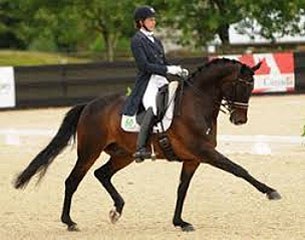 "He suffered an injury to his hock and after several weeks of treatment from vets and specialists we determined that it was time," said Jennifer Williams.

Bred by the late Charlene Summers in the U.S.A., HS Wrevolution was registered as a Hungarian warmblood. He was sired by HS Wistar out of HS Marado II (by Rubin).

Williams acquired him as a 3-year old from Christina Baumann and trained him up the levels to Grand Prix. They were 13th at the 2010 American Young Horse Championships when the gelding was 5. Along the way to Grand Prix the pair was coached by Steffen Peters and Christophe Theallet.

Williams and HS Wrevolution made their international show debut in 2016 at small tour level. They contested the CDI's in Rancho Murieta, Del Mar, and Langley and won the Intermediaire I at Rancho and Langley.

By the summer of 2016 Williams moved the horse up to Intermediaire 2 level at national shows and they made their national Grand Prix debut in 2017.

"My heart is absolutely broken and I am just so sad. There was so much left we had hoped to do together," said Jennifer.