The inaugural 2017 Lisbon International Dressage Show became a huge success with top level competition and massive participation during two weeks of national and international competition at the historic Sociedade Hípica Portuguesa in Lisbon, Portugal. Hosted on 22 - 24 September and 28 September - 1 October 2017, the brand new Lisbon based competition aims to become a steady fixture on the FEI calendar.

The 100-year old main stadium of the Sociedade Hípica Portuguesa saw dressage return to its venue after a 12-year old break. The first weekend counted 97 horses in the Open and Pony Championships and para-dressage. The second weekend hosted the CDI and FEI Dressage Championships with 80 competitors. Throughout the two weekends the weather was consistently brilliant and classes were competitive, which highlighted the development of the sport in the country. 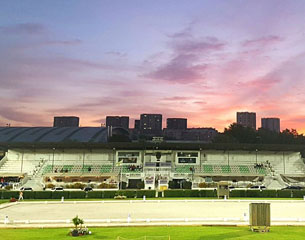 “The show was incredibly well organized, the people super friendly and the venue really pretty,” said 5*- judge Maribel Alonso about last weekend’s CDI, held for the first time since 2005 in Portugal’s capital city, Lisbon. The judges got to see a bit of everything as the CDI was run in conjunction with the National Championships.

The event was organized by Dressage First with rider Maria Pais do Amarel and Frederico Pinteus as driving forces behind it. The show saw many well known Portuguese riders come to the front, amongst some exciting new combinations. The event was also the first to offer the new ‘Rubi International Award’ for the highest scoring Grand Prix rider on a Lusitano at the CDI. 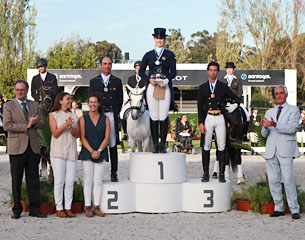 The Medium Tour was an exciting class won by Olympian Daniel Pinto on the Lusitano mare Esquadra MVL, while second place went to former team rider Manuel Veiga and his home bred mare Bailarina, while third place went to Gonçalo Diabinho and Uige.

The three Pony classes were highly contested with the podium places going to Francisca Castro Monteiro, Francisco Braz and Manuel Maia. Twenty-eight ponies in total were qualified to compete at this show, which proved the positive development of dressage in Portugal in the youth classes.

A CDI of the Highest Standard on Second Weekend 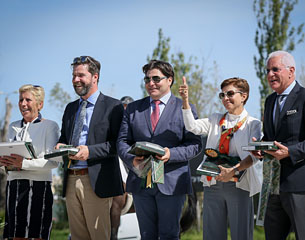 The show continued on 28 September - 1 October with a CDI and National Championship classes for Young Horses, Children, Junior, Young Riders and Seniors. The CDI counted with a world quality panel of 5* judges, with Mexican Maribel Alonso as president of the ground jury, assisted by Raphael Saleh, Gotthilf Riexinger, Francis Verbeek, and Hans Christian Mathhiesen. Carlos Lopes, the only Portuguese international judge, completed the ground jury for the CDI.

“The first day some riders did not perform at their best but what came as a very pleasant surprise was that most improved as the weekend went on,” says Maribel.  “All of them read our sheets and remarks and tried to improve in accordance with those guidelines. And the judges could tell!” 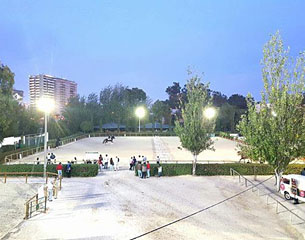 The facilities at the Sociedade Hípica Portuguesa meet the highest demands of any top dressage rider. The beautiful 20x60 competition arena and three warm up arenas all had top all weather footing and for spectators a restaurant with a nice terrace located in front of the main arena, provided perfect viewing condition. During the main competition days, VIP tables were available and sold out at lunch time when the freestyle finals were being ridden.

The action was non-stop at the Lisbon International Dressage Show with the Portuguese Young Horse Championships putting the spotlight on the country's best 4, 5, 6 and 7-year olds. 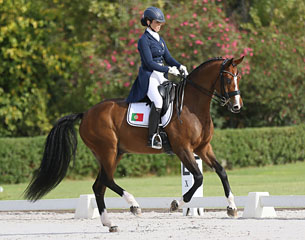 The youth classes were won by Lucas Lopes in "Iniciados" and Francisca Monteiro in "Juvenis" for the absolute youngster equestrian athletes. The Junior division was quite a competitive one with Junior team rider Sebastião Lucas Lopes getting gold on Arrogante. The Young Riders division was dominated by Martim Meneres ahead of Yoann Pinto, son of Olympic rider Daniel Pinto.

Taking to the arena on three very talented Lusitanos, Maria Caetano won all Small, Medium, and Big Tour Classes, with the exception of the Grand Prix Special. 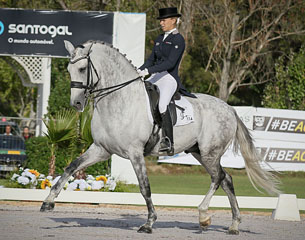 First in both the Prix St Georges and Intermediate I tests on her younger horse Fenix de Tineo with scores of 71.060% and 70.480%, Maria went on to win the Intermediate A and B tests on Biso das Lezirias (by Solar dos Pinhais), and finally the Grand Prix on board Coroado AR (by Rubi) with 72.720%.

Aboard her number 1 ride Coroado Caetano won the 2017 Portuguese Grand Prix Championship and claimed the biggest national title for the fourth time in her career.

“It was a great competition for me," said Maria. “I competed three horses at three different levels and won all of them above 70%. I think I still don't believe in this! I'm very happy with my three boys!”

Maria explained that it was a special honour to win the new "Rubi International Prize" for the highest scoring Grand Prix combination on a Lusitano bred horse. The Prize was created by Christine Jacoberger, owner of the 2012 Portuguese Olympic stallion Rubi and highly celebrated breeding stallion. Show organizer Maria Amaral had contacted Jacoberger with the idea of sponsoring a very special award at the CDI and the Luxembourg based stallion owner with her heart in Portugal immediately agreed. 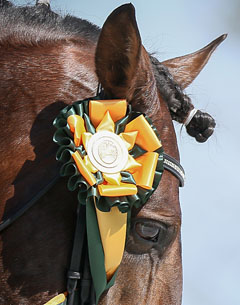 “Rubi deserves it. He has until now the greatest history in dressage for any Lusitano horse," said Jacoberger. “My objective with this award is to highlight this fantastic breed, particularly those Lusitanos competing in the international big tour. The lower level does not interest me. The essence of dressage is in reaching Grand Prix!”

Christine's wish is that more and more good Lusitanos will ridden by good Grand Prix riders so that the results her Rubi once achieved will be exceeded one day.

The Rubi International Prize includes 2,000 euro, and this amount may even increase in the following years. Christine says that she couldn’t be happier that the first ever recipient of the award was a Rubi son.

“I am very happy of course that it is a son of Rubi winning. And I like very much Maria’s fine way of riding. In fact, I am her number 1 fan!” 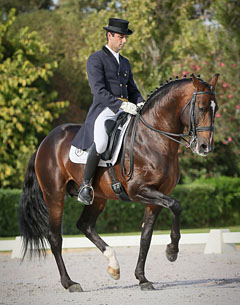 The Grand Prix Championship was not without its sensations as Rodrigo Torres and his 10-year old Lusitano stallion Califa II were the surprise silver medallists. The pair exceeded all expectations as the home bred stallion (by Raja out of Ureai) is still inexperienced. The duo won the Special and scored 74,37% in the Kur at only their third international competition. Ricardo Ramalho and Despinio won bronze.

“I couldn’t be happier with Califa’s performance,” said Rodrigo. “He is still quite young and green but is already showing what he can deliver.”

Rodrigo added that even with some minor mistakes, Califa was able to do some really high level exercises, and he got some very positive feedback from the judges.

“For me his absolute highlight is the canter. In the Kur I was feeling him very confident and was able to ride a whole diagonal of one tempi's with one hand, it was a fantastic feeling," Rodrigo gushed. "Getting silver medal on top of that and 74,3% was a great reward for the work my family has been developing for so many years in breeding lusitano horses for dressage sport. My plan now is to compete him internationally next year, and I hope to be able to get some good results for Portugal.”

Looking to the Future 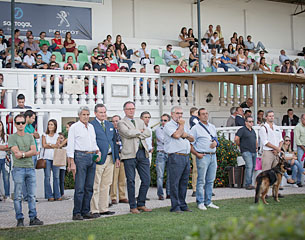 The Lisbon International Dressage Show has the ambitious goal to develop itself into a brand and be a fixture on the FEI calendar at least for the next four year.

Organized by Sociedade Hípica Portuguesa in joint venture with Dressage First, the CDI Lisbon is the brain child of Luís Faísca, Frederico Pinteus, Maria Pais do Amaral and Luciana Inácio. They formed the organizing team and hosts and have great hopes for future organizations.

"We plan to repeat the competition yearly and to make it a reference for Portuguese and Iberian international competitions," said Pais do Amaral. "With Portuguese dressage developing fast and well, it’s our belief there should be a top quality dressage competition in Portugal. Lisbon offers extraordinary conditions, with the airport 10 minutes away from the show ground and hotels very close by, too. The weather and food offer great conditions and the beauty of the city full of history and next to the sea, make it a unique spot to join an international competition with some days of holidays in one of the trendiest cities in Europe." 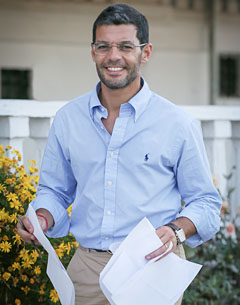 Frederico Pinteus confirms that the inaugural CDI was very well received and that the the riders were really enthusiastic about having such a good panel of judges.

“This show was only possible due to the huge effort of the Sociedade Hípica Portuguesa, the Dressage First sponsors, and riders who joined synergies and were able to do something special," said Pinteus.