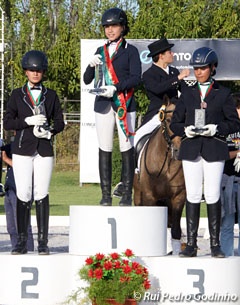 The 2017 Portuguese Dressage Championships were a great success with the new show venue offering professional conditions for horse and rider and the beautiful late summer weather setting the tone. Each championship division was well packed with participants which proves the progress the country is making in the development of dressage.  The sixth team place finish for the Grand Prix riders at the 2017 European Championships in Gothenburg has certainly boosted the sport. The youth division have also increased in popularity with young Portuguese kids on ponies and mainly Lusitanos trying their best, but the scores were overall still modest. 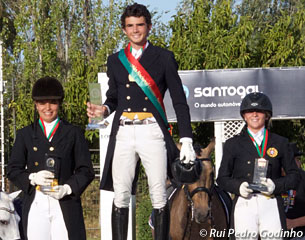 "Arrogante felt very good this weekend and I am very happy with the result,” said rider Sebastiao Lucas. “My plan for the next year is  to continue competing at CDI level and trying to earn a spot to represent Portugal at the European championships!” 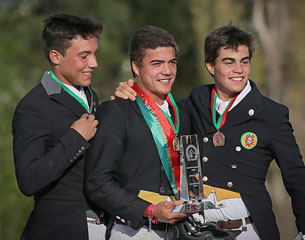 Nine combinations battled it out for the Young Rider's title and Martim Meneres was undefeated with an overall 9% point advantage to the rest of the pack. Aboard the 8-year old Lusitano Equador (by Peralta) he scored 69.920%, 70.300% and 70.390% for gold. Yoann Pinto and the 14-year old Lusitano Xelim (by Latino) were remarkably absent for the 2017 European Young Riders Championships and now got sandwiched on the podium by two Portuguese riders who did represent their country in Roosendaal.  Pinto scored silver with two second places on 66.040%, and 65.020% and a victory in the Kur with 70.590%. Manuel Vinagre and the 12-year old Lusitano Almansor (by Riopele) finished with bronze with overall three percent less than Pinto. Vinagre got 65.060% in the team test, 63.300% in the individual and 69.210% in the Kur.

"We were very happy but we were not surprised by the win. The horse has proven himself at this level," said a confident Martim. "The canter is still our greatest strength, and while the trot still needs more work, it gets better at every competition.” Martim explained that the only mistakes were in the Kur test where he dropped to second place after missing two lots of tempi changes. “Our goal is to keep on improving and to make the Europeans again but this time with the goal of earning a starting spot in the kur.” 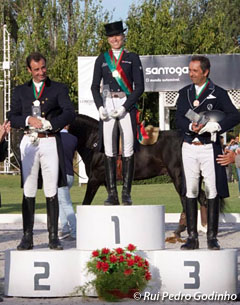 Six senior riders competed in the Grand Prix championships and Maria Caetano and the 10-year old Lusitano Coroado (by Rubi) grabbed the title with two personal best scores in the Grand Prix (72.720%) and Kur to Music (77.310%) and a second place in the Special (67.820%). Her overall of 217.850 points earned her gold and the champion's sash. For Caetano, who is also being coached by Ton de Ridder alongside her father Paulo, the weekend was a major success as she also won the national small tour classes on the 7-year old Fenix de Tineo (by Rubi AR) and the medium tour on the 11-year old Lusitano Biso das Lezírias (by Solar Pinhais). Rodrigo Torres and the 10-year old Lusitano Califa II (by Raja) got silver with 210.750 points. He scored 67.400% in the Grand Prix, won the Special with 68.980% and was second in the Kur with 74.370%. Ricardo Ramalho and his 12-year old Hanoverian Despinio (by De Niro) grabbed the bronze with 205.830 points overall. The duo scored 68.660% in the Grand Prix, 67.760% in the Special and 69.410% in the Kur. Remarkably absent from the Grand Prix championship were 2017 European Championship team riders Daniel Pinto, Vasco Mira Godinho and Boaventura Freire.

"Coroado was in top form for the championships," Caetano told Eurodressage. "In the Grand Prix he was perfect with a mistake-free test full of suppleness and harmony. In the GP Special he was super in the trot/passage work, full of energy, maybe one of the best feelings I ever had with him, but in the walk he spooked when he saw his shadow in the ground with the flood light and we lost a lot of points for it. It was a pity because he was going really well. Then in the freestyle he gave it all! One of the best days of his life. I'm so proud of him!!! After a very nice performance in Gothenburg he was even better here."