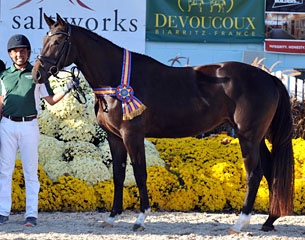 Maryanna Haymon's Hanoverian mare Danae MF was named the Grand Champion of the 2017 Devon Breed Show, the most important title to be won at America's most important warmblood breed show of the year.

The 3-year old Hanoverian Danae MF (by Doctor Wendell MF x Rotspon) already collected the titles of Filly Champion and Young Horse Champion on Tuesday 26 September, but the next day she added the Grand Champion's title to her list of achievements.

“It’s been an amazing couple of days,” said Maryanna, who underlines that Danae MF has been a quiet, trusting, affectionate horse from the beginning. "She’s a very accomplished 3-year old." When asked if she expected her horse to win the big title, Haymon replied, "everybody wants to win, but nobody expects to." The mare will now be taken home where she gets some downtime during the winter. "In the spring we will start her back up again and see where she wants to go," Haymon told Eurodressage. "We hope to develop her to a Grand Prix horse."

Haymon breeds for Grand Prix qualities and can offer regional Grand Prix horses who are “safe, sane, and competitive,” CDI competitors, and then there are those who could make any Olympic team. She says horses bred in the U.S. meet or surpass the caliber of horses bred internationally. “As a breeder, you can never be satisfied. You can be pleased, you can be happy but if you’re satisfied, you’ll never improve. This is our 26th year at Dressage at Devon and it’s very special to me. The volunteers are very supportive, helping to keep us on time and safe and the staff is great. It’s a special place, a special event, and a special experience.” 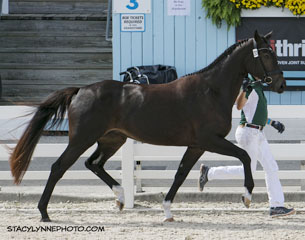 A Celebration of Sport Horse Breeding 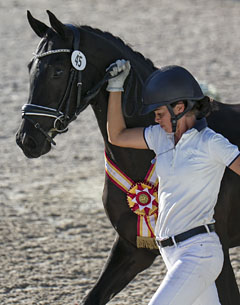 on Wednesday morning  27 September, Hannah Salazar's Dulce Rosa topped the board in the Mare Championship and Mature Horse Championship, twice ahead of Stenagars Welina.

In the "Produce of Dam" class, Angela Mirarchi's 17-year old Hanoverian mare Wiesling (by Wolkentanz x Domingo) took highest honour. This mare is bred by Bettie Carroll. While Anke Ott Young received the title in the "Get of Sire" division with her group of Furstenball (by Furst Heinrich x Donnerhall) offspring.