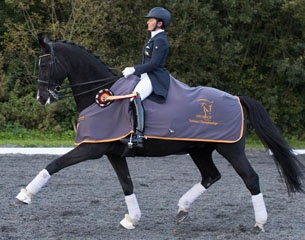 Irish pony team rider Robyn O'Neill dominated the FEI Pony Championships on her 16-year old Dutch bred Belsasser. She won the team test with 67.821% and the individual test with 68.802%. New comer Sadhbh O’ Toole collected the silver aboard the 15-year old Dutch bred Schermeer Hof Arendsoog (by Le Matsjo x Cupkehof Winobert), who first had a CDI career under Dutch rider Franka Loos, before selling to the U.K. to Alicia Patrick. The palomino then sold to Ireland to become the schoolmaster for now junior rider Alana Cazabon Sullivan. With his new rider O'Toole he finished second in the team test with 67.244% and fourth in individual test with 60.610%. The bronze went to level newcomer Bonnie O'Reilly on Don Quixote III (by ). She was third in the team test with 65.577% and third in the individual with 64.390%.

Reigning national champion Anne Marie Dunphy, from Co. Kilkenny, won the Grand Prix with Urbanus to retain her title at the Irish championships in Cavan Equestrian Centre.  "This is special" said a delighted Anne Marie "After winning last year in Barnadown to come back and win again with Urbanus is great. Urbanus and I plan to be back next year to defend our title."  The pair also won the Intermédiare II championship to add to their Grand Prix victory.   Sandra Blake Farrell announced that the 22-year-old gelding St Emillion (by Siant Cloud) had competed his last big tour class after they danced their way to victory in the Grand Prix Kür championship.

The first Irish national dressage championships were held in the Royal Dublin Society in 1977 when there were just thirty competitors in contrast to the record number of entries competing over three days this year.  To mark the fortieth anniversary, Ireland's first national champion Jacki Doherty received a special presentation and she presented the Grand Prix trophy to Anne Marie Dunphy.  Biggest absentees at the 2017 Irish Grand Prix Championships were of course Judy Reynolds, whose Vancouver K is recovering from an injury, and the British based Roland Tong who competed Ambience last at the June CDI Bolesworth.

Dressage Ireland chairman Joe Reynolds promised to open up the sport of dressage to more participants when appointed in August 2016. The introduction of the senior and junior Trailblazers championship classes at preliminary and novice level proved a big success with an additional arena added to the programme for the final day of the championships.  Joe's daughter, Irish Olympian Judy Reynolds, travelled from Germany to present the prizes.