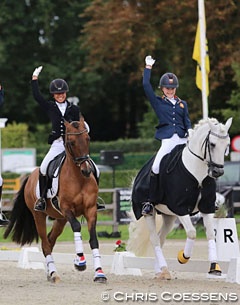 In the pony classes, Shanna Baars scored a double on routinier Don Camillo du Bois, a 13-year Dutch bred pony by Dornik x Eduard. She won the trophy in the team test with 72.393%, placed second in the individual test with 71.463% behind Micky Schelstraete on Elin's Noncisdador, and won the Kur with 75.000% edging out Schelstraete.

The Baars family acquired Daphne van Peperstraten's two internationally competed ponies Don Camillo du Bois and Wonderful Girl for daughter Shanna last year, but unfortunately the 2016 Dutch European Championship team pony Wonderful Girl has been injured and Baars had to rely on Don Camillo for experience. The bay gelding has fulfilled his duty and taken Baars on an experience-gaining year at CDI's in Europe, including Compiegne, Hagen, and Nieuw en St. Joosland. 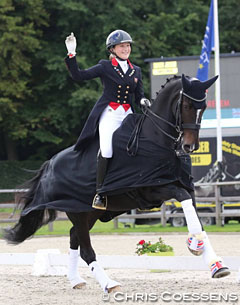 In the junior division, British Rebecca Bell did herself proud on the 10-year old British bred mare Nibeley Union Hit's first overseas CDI. The combination won the Junior Team test with 72.568% and the Junior Kur to Musi with 75.875%. Eighteen-year-old Rebecca, who was a member of the gold medal-winning British Pony team of 2015, and her Nibeley Union Jack offspring placed second in the individual test with 71.184% behind Dutch Milou Dees on the 7-year old Dutch warmblood gelding Francesco (by Florencio x Krack C). Dees acquired the dark bay gelding two years ago and made her CDI debut at the 2017 CDI Waregem.

“The showground was great with good surfaces and facilities and the organizing committee was so lovely and always wanting to help - thank you for making us so welcome," said Bell on Facebook. "Una was such a pro on her first trip abroad, taking everything in in her lovely considered way, and our results were above and beyond my expectations- 3 +70 scores culminating in 75.875% to win the Kür today! Hearing the national anthem played for this mare after all we've worked through to get here did bring on the emotions - but I promise I didn't cry!” 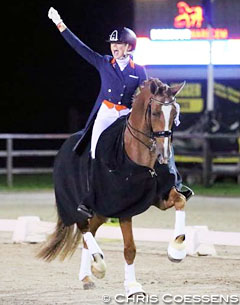 In the Young Riders division professional Febe van Zwambagt was a league of own, scoring a hattrick on her 10-year old Rhinelander bred FS Las Vegas (by Lord Loxley). She scored a hattrick with winning marks of 69.737% in the team test, 74.474% in the individual test and 77.642% in the Kur to Music.  Febe was busy at the CDI Waregem as she also coached pony rider Thessa Gilbers at the show.