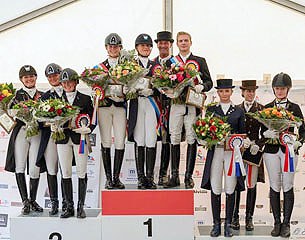 Pony rider Lynn Thill, junior rider Emma Lou Becca, small tour rider Nicolas Wagner and Grand Prix rider Sascha Schulz became the champions in their age division at the 2017 Luxembourg Dressage Championships which were held during the 2nd Gosset Champagne Dressage Festival at Ecurie Um Sonnebierg in Hünsdorf, Luxembourg, on 14 - 19 September 2017. Riders from Germany and Belgium competed amongst the majority Luxembourg crew that was battling it out for the title.

The Under 16 division included FEI pony riders and children riders. They had to compete in two classes for the Championship: the Children preliminary and team test, but three tests were in fact held. Lynn Thill and her Belgian bred sport pony Interbrew De Rechri (by Calipso van de Vondelhoeve x Ten Ankers Jerolianca) scored the gold. The pair was second in the preliminary test with 72.056% and fourth in the team test with 67.222% and they won the class on Sunday with 69.740%. They won the Under 16 title. 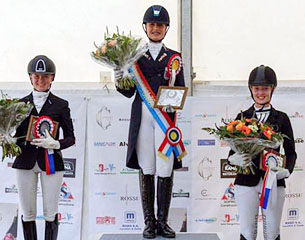 The small tour championship was ridden over the Prix St Georges, Young Riders Individual test and Intermediaire I Kur to Music. Nicolas Wagner and the 8-year old Hanoverian Quater Back Junior (by Quaterback x Bonheur) finished on the highest step of the podium after winning the Prix St Georges with 73.904%, the YR Individual test with 74.474% and the Kur to Music with 75.708%. Danish born Kristine Möller and Jens Thorsen's 8-year old Trakehner Pequinet (by Prinz K3 x Silvermoon) finished with silver on 69.211%, 72.004% and 70.833%. Claudine Lemmer and the 13-year old Hanoverian Royal Flush (by Rosario x Landadel) scored bronze on 65.658%, 67.588%, 66.458%. 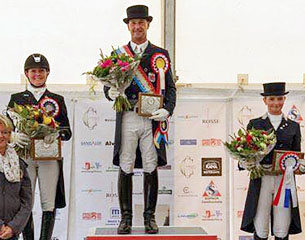