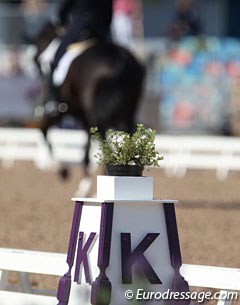 The Dressage Judging Working Group has recommended to the FEI Dressage Committee the adoption of the HiLo Drop Scoring Per Movement to go before the 2017 FEI General Assembly.

It is the DJWG's recommendation to adopt the HiLoDrop scoring per movement for all FEI dressage competitions, with the exception of Young Horse events and for all juries with 3 judges.

This proposal only affects the way that final scores are calculated for each Rider-Horse combination. No judges score sheets are changed and the individual judge’s results are published just as they are today. The only change is that movement by movement, instead of calculating an overall average the average of the middle scores is used where the top and bottom scores are not included. The final score for the combination is then formed by the usual process of coefficient multiplication and summing to form the final percentage result.

For the majority of cases the effect is tiny, much smaller than the actual precision of a Dressage result. But for cases where one judge is “always” high or low for a given rider, or indeed is very different from that of their colleagues, the effect on the result will be significant and it will then represent more the consensus view with a reduced influence from any single judge.

Key features of the proposal

Why is this proposal necessary?

What is being proposed?

What impact will this have on athletes and NFs?

What impact will this have on judges

Details of the HiLoDrop Proposal

What exactly is being proposed?

In the HiLoDrop system being proposed the method of calculating each judge’s final score is completely unchanged and each judge final score will be part of the official record along with all their movement by movement scores. But the final score awarded to the competitor will be calculated using HiLoDrop. In this the highest and the lowest awarded marks for a movement are removed and the other scores are averaged to form the movement score. These movement scores are then summed as before and expressed as a percentage of the maximum possible score. All scores awarded by each judge form part of this process and no judge’s score is ever changed.

The following table illustrates how it would work for a randomly chosen block of scores from a recent event; 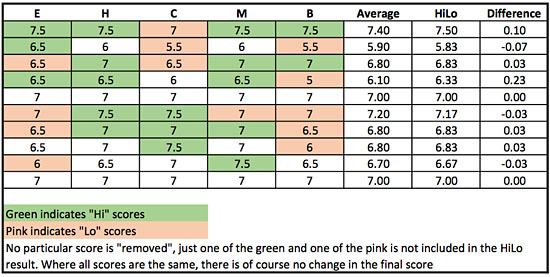 Figure 1: Illustration chosen at random from a recent event

A real-life recent example of such a new score sheet applying the HiLoDrop is shown below. (The current movement score is also shown in this example, for comparison purposes) 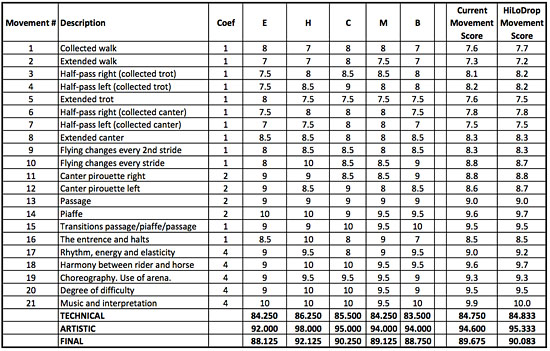 The changes to the movement score are typically small and in this case the final awarded score is slightly higher. For example, a 10 and the 9.5 are removed from the Music and Interpretation movement score resulting in an awarded score of 10.0 instead of the previous 9.9.

In the vast majority of cases this is typically what will happen, there will be a small change of awarded score. From a study of 1320 GP level tests with 5 or more judges in 2017 the average score change per rider was +0.09%. 224 scores dropped a little and 1096 scores went up a little. In the Appendix, more details are shown.

HiLoDrop is however extremely powerful at correcting important judging differences that occasionally make ranking changes in key events. In particular the following types of anomaly are completely corrected through HiLoDrop:

The use of the average of 5 or 7 judges is just one way to calculate the score to award. From a purely statistical point of view the average is known to be a biased estimate of the “correct” value when there are only a few measurements (as is the case with 5-7 judges for each movement). Better measures are, for example, the median (or central) score. However, the median method fully removes all but the central value and surely some information is lost.

Our goal in proposing this rule change is to establish for dressage a system that is in common use in other sports, including other equestrian disciplines. It is easy for the public and rider to understand and reduces the impact of judges with a divergent mark on the score of each movement. We fully recognize that sometimes this will discount a score that may after full analysis be considered to have been the most correct. That score will remain on the score sheet but the awarded final score will reflect the general consensus at the time of the test.

Only by education, training and experience, or a change in judging system, can that consensus be more often the perfect correct result we would wish for, but HiLoDrop will ensure that the general consensus is more often the one that is used to award the final score and to determine the final ranking.

HiLoDrop does not tell judges what to award. As today, a judge who sees an exceptional execution or a mistake is encouraged to award the score that they believe is the most correct. Their score will stand and can be discussed as today with other judges after the event and can be understood by the rider in the same way as today. No judge’s notes are ever actually discounted from the final score in totality unless they are high or low for every figure. There is no reason for judges to be more conservative in their judging. If two judges give a 10 or two judges give a 4 then the 10 or 4 will strongly influence the final result. Just as today, judges must award the score they believe in. Most riders will actually receive a boost in their final score.

HiLoDrop favours the consensus opinion of the judges whilst reducing the individual influence of a single judge on the final score. The changes introduced due to differences on a single figure are typically immeasurably small, even a 4-point difference for a single figure, today changes the final score by just .001%. It is only in the case of a judge being very different for the majority of the test that any significant change in the awarded final score will be visible. The goal is not to change the important role that multiple judges and judges position brings to the sport, but just to arrive at a more representative final result for prizes, medals and public understanding.

Appendix : Analysis of the effect of HiLoDrop on all competitions in the first 5 months of 2017.

As noted above the average change in awarded score is +0.09%. The standard deviation of this difference is 0.21%. 17% of results are adjusted down by a small amount, 83% are adjusted up. Four out of Five riders receive a small boost from HiLoDrop. The actual distribution of score changes is shown below 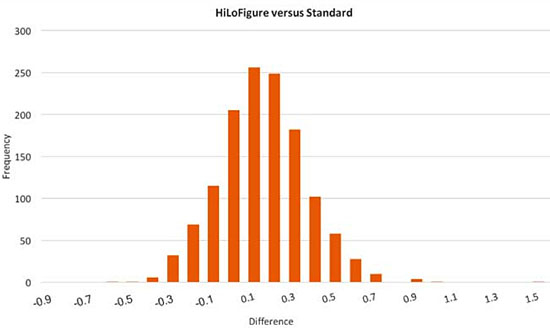