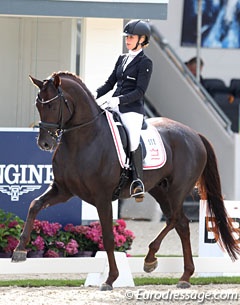 Under Selina Solberg Vittinghus, the chunky liver chestnut stallion finished 16th at the 2016 Danish Young Horse Championships in the 4-year old division. This year they were the runners-up in the 2017 Danish Warmblood 5-year old Championship held in Herning.

Atterupgaards Botticelli competed at the 2017 World Young Horse Championships in Ermelo, The Netherlands, where they were 29th in the preliminary round (7.52), first in the consolation finals (9.1.) and last in the Finals (15th place) with 7.4.

Botticelli is licensed with the German Oldenburg Verband and Swedish Warmblood society.