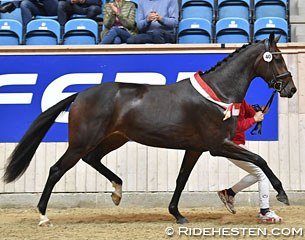 The elite mare championship is open to 3-year old mares that have been performance tested. In Denmark mares at the elite show are ranked according to a medal system: gold, silver, bronze.

This year three mares were named gold medal mares and Skovens Tzarina was named best in show. This champion is by Zack out of Tazorba (by Don Schufro x Zorro Z). The dark bay is bred by Kirsten Bjerregaard Hansen and Jens Lund Pedersen and owned by Andreas Helgstrand, who purchased her as a foal at the elite auction in 2014. Tzarina is out of the same dam as the licensed stallion Skovens Raphael. 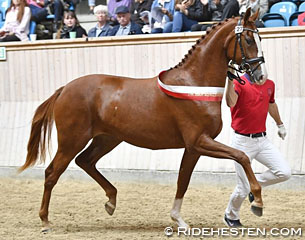 The other two gold medal mares are Mogens Pedersen's Straight Horse De Milla (by De Niro x Zack). She is out of a full sister to Grand Prix stallion Zonik and scored 10 for type and trot. Kurt Gosmer's Queenparks Wendy (by Sezuan x Soprano) was the third gold medal winner. She scored a 10 for rideability and canter.

In the 2-year old mare division six fillies were invited to the champion's ring to fight for the title. The chestnut Springborgs Guinea was named champion. She is by Sir Donnerhall out of Springborgs Givenchy (by Diamond Hit x Heslegards Rubin) and is bred by Per and Pernille Springborg.