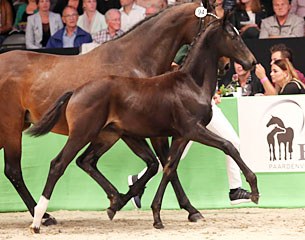 The colt Mackenzie Texel became the price highlight of the 2017 KWPN Foal Auction Borculo held at equestrian centre Lichtenvoorde in Vragender, The Netherlands, on 31 August 2017.

On Wednesday evening 30 August a collection of jumper foals was auctioned and the top selling foal achieved a knock down price of 47,000 euro.

Fifty-two dressage bred foals were auctioned and they achieved an average price of 13,262 euro.

"Just like last night this was a top auction. There was more variation in the prices, but he had a very beautiful collection of foals which was appreciated by the buyers," said Borculo chair Jan Markink. "The Borculo foal auction is back at the top and I dare other auctions to beat us."