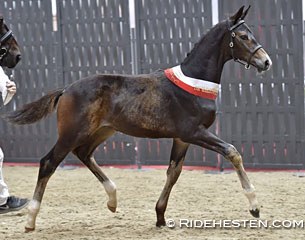 The colt Svalegards Hot Boy and the filly Faretti were named the winners of the 2017 Danish warmblood foal championship which took place during the 2017 Danish Warmblood Elite Mare Show in Vilhelmsborg, Denmark, on 25 - 26 August 2017.

Five colts were invited into the champion's ring to battle for the national title. Svalegards Hot Boy was named the colt champion in the dressage division. Bred and owned by Else Marie and Jens Krabbe, Hot Boy is by Hesselhoj Donkey Boy out of World Young Horse Championship finalist Svalegards Hottie (by Hotline x De Noir). Hot Boy sold at the auction in Vilhelmsborg for 24,000 euro. 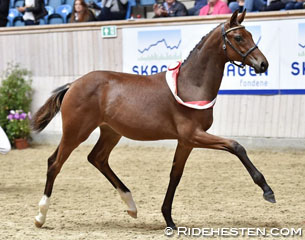 In the filly division six were invited to the champion's ring and Faretti was named the champion. Bred by Henrik Hansen and owned by Havgaard Horses, Faretti is by Franklin out of Don Dorissimo (by Don Frederico x Ibiskus). She was sold for 150,000 euro at the 2017 Nordic International Sales foal auction in Uggerhalne in May.