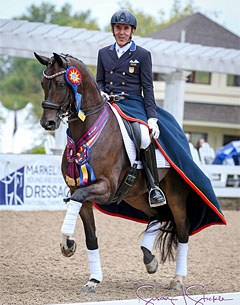 Parra kicked off the first leg of the competition on Thursday by earning first place in the Intermediate II class. They went on to deliver another spectacular performance in the Developing Horse Grand Prix on Sunday, clinching the Championship first place title.

Fashion Designer has proven his outstanding promise and potential during each year at the competition, placing in the top 3 overall in the Five-Year-Old, Six-Year-Old, and the Developing Prix St. Georges divisions in previous years. Last year, Parra and Fashion Designer OLD won the Reserve Champion title in the Developing Prix St. Georges division. As the cherry on top of a phenomenal weekend for the pair, the stellar dressage mount also received the Oldenburg Breeders' Horse Society award for the highest score of an Oldenburg in the division.

“I’m very proud and thankful to be a part of this horse’s development. He has already achieved so much success- winning in Germany and excelling in the Five-Year-Old, Six-Year-Old, and Developing Prix St. George divisions here at Lamplight. After watching him develop and progress so well through the levels, to reach this accomplishment is so rewarding. And there’s so much more to come- I know he’s capable of even more than we have seen from him so far, and I’m really excited to continue on this path, to continue his development, and see what else he is capable of achieving. There are so many people, both here in the USA and in Europe that have been instrumental in Fashion's success. I am so very grateful,” remarked Parra.

“I also want to send a huge thank you to the owner of Fashion Designer and my great supporters, Martin and Toni Sosnoff, to my wife and kids for always supporting me, to my amazing groom Jennifer Mandracia, to my team at home who did a great job keeping the barn running, to our sponsors GK Elite Sport, Custom Saddlery, KEP Italia, Jose Alvarez Reitsport, Arenus, TheraPlate, ColdFlex, Skylands Saddlery, Mundo de Equitacion, ThinLine, and Tota Comfort. It definitely takes a village and I am very fortunate to have such a great support system.” 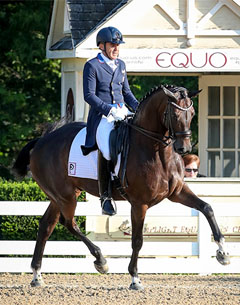 Next up, the internationally successful rider and trainer will travel to his native Colombia to coach several international team riders. After that, Parra and his team of exceptional riders and horses from Performance Farms will travel to compete in the annual Dressage at Devon Horse Show, set to take place from September 26th through October 1st in Devon, Pennsylvania.

Dr. Cesar Parra is the founder and head trainer at Performance Farms, an elite dressage training facility based in Jupiter, Florida, and Whitehouse Station, New Jersey. Performance Farms is dedicated to developing exceptional horses and helping riders achieve their goals in the dressage ring. Dr. Parra is an Olympian, a Pan American Games Dressage Team Gold Medalist, and a Nations Cup Silver Medalist, as well as a two-time World Cup Finalist and two-time World Equestrian Games competitor. In addition he has won, and coached multiple riders to numerous US National Titles. To learn more about the training, lessons, and horse sales offered by Dr. Parra at Performance Farms, visit www.Piaffe-Performance.com.