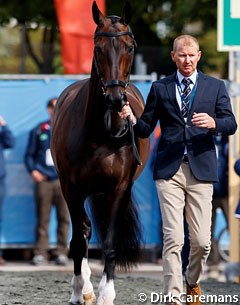 British team horse Don Carissimo (by Don Crusador x World Cup III), owned by Anne and Steve Keen and ridden by Gareth Hughes, has not been presented for reinspection.

"He arrived fit and well in Gothenburg on Saturday. With the other team horses he was checked over and was given a full bill of health. We had 2 great rides, including one in the main arena and he felt super and ready for competition," Hughes explained. "Somehow he has suffered an injury before trot up. We have been able to get him x-rayed on site and they are all clean. We will now investigate further to find the problem. It is a huge blow and really disappointing for Darcy's owners Ann and Steve Keen, who have hugely supportive, ourselves and the team."

Photo © Dirk Caremans - Check out Dirk's website for a complete gallery of the horse inspection.