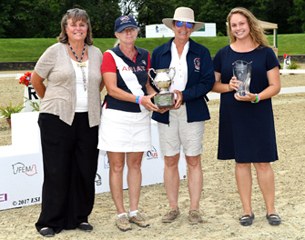 “To say that Sue Bender is devoted to her Region 3 teams is an understatement. She works tirelessly, all year, to give the athletes the best NAJYRC competition experience that she can. She never stops advocating for her teams. She truly demonstrates what the Albers Award seeks to reward,” stated Roberta Williams, USDF FEI Jr/YR Committee Chair.

The Albers Award is named in honor of long time USDF Region 1 Chef d'Equipe, supporter, and good friend, Patsy Albers. The award is presented annually at the USDF North American Junior & Young Rider Dressage Championships, to the dressage chef d'equipe who best demonstrates the same level of dedication, enthusiasm, and team spirit shown by Patsy, throughout the years.

The award is open to all of the dressage chefs d'equipe, and any competitor or chef d'equipe can nominate a candidate by submitting a written explanation as to why that chef deserves to win the Albers Award.