Minderhoud and Johnson Withdrawn from Dutch Team, Scholtens In 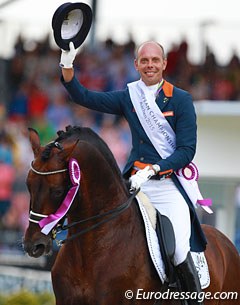 Hans Peter Minderhoud and Johnson will not be competing at the 2017 European Dressage Championships in Gothenburg, Sweden, next week. The horse has sustained a minor injury. Reserve rider Emmelie Scholtens will step in.

Minderhoud and Johnson were the team gold and Grand Prix Special bronze medal winning combination at the 2015 European Championships in Aachen, but will not be able to repeat that feat in 2017 in Gothenburg.

On Tuesday 15 August the long-time team rider announced that his 15-year old KWPN stallion (by Jazz x Flemmingh) has sustained a minor injury.

"Last week Johnson lost a shoe in his stall at night and he stood with his hoof in the clip of the shoe," Minderhoud explained. "We only found out in the morning and immediately called the farrier. Despite accurate treatment, it still got infected and it was clearly hurting Johnson. So I couldn't ride him last week. Now we had to take a decision and Johnny won't be fit enough for the European Championships. It's tough luck, but the horse comes first and we hope that Johnny will recover fully."

"It's a pity but fortunately with Emmelie and Apache we will still have a very strong team," said team coach Rien van der Schaft.