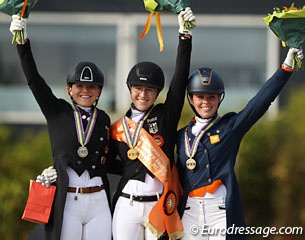 German Hannah Erbe made it three out of three, winning her third gold medal at the 2017 European Young Riders Championships in Roosendaal, The Netherlands at the last day of competition 13 August 2017. After earning team and individual test gold, Erbe freewheeled to freestyle gold on a sunny Sunday afternoon. Anna-Christina Abbelen scored her second silver, just as Jasmien de Koeyer got her second bronze.

The podium of the Young Riders Kur to Music Finals came as no surprise. Often the individual test podium gets reduplicated when none of the medal-getters don't make mistakes in the Kur. The quality of their music or originality of the floor plan do not seem to be strong enough deciding factors to influence the ranking.

The 18-year old Hannah Erbe, who in principle is still a junior rider, wielded the axe of power the entire week. After winning the 2016 European Junior Riders Championships in Oliva Nova, the German showed little struggle with the small tour program on her super talented Carlos at the 2017 Young Rider Europeans! Also in the Kur to Music she mastered the task at hand. 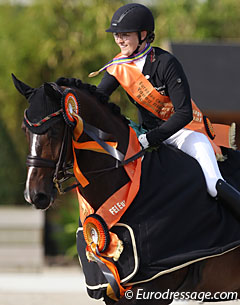 Riding to a newly arranged freestyle with music by Chaka Khan and Bronski Beat, Erbe and her 10-year old Rhinelander Carlos (by Carabas x Weltmeyer) showed superb trot extensions with such beautiful articulation in the legs. There was a great flow in trot with big half passes. The extended walk had good ground cover but in the collected walk he got lateral on the bent line, but then improved on the straight line. Erbe rode four tempi changes on the half circle. The exit of the right pirouette was difficult, the three tempi changes were dead straight.

Hannah was beaming with pride at the press conference and credited her coach Heiner Schiergen as the secret of her success. "All I can say is that these Championships were amazing," said Erbe. "There was great team spirit in the German team. We had fun." When asked if she will continue at young riders' level, Hannah replied, 'we'll work this winter and then decide. In fact I'm still a junior."

Erbe rightfully shared a critical note for the insane show schedule which the organizers had implemented in the Championships, by only having one main competition ring for three divisions. "Today Carlos was a bit tired. It's not easy if a competition starts really early and ends in the middle of the night."

Erbe's stable mate at Heiner Schiergen's barn, Anna Christine Abbelen, won her second individual silver alongside team gold. Aboard her 11-year old German Sport Horse mare First Lady (by Florencio x Donnerhall) she once again rode her The Lion King freestyle; a kur which she has been recycling since 2013! Time for something new one would say... 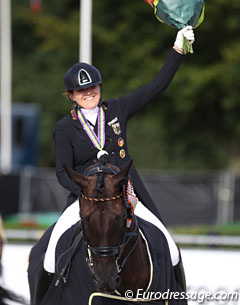 The black mare First Lady began with a small lapse in the rhythm in the extended trot but then continued to produce a solid performance. The second trot extension was uphill, the extended walk was good, though the collected slightly tense. The three tempi changes on the centerline was correct but a bit laboured, the pirouettes were good, the four tempi's ground covering though there was some swing to the right. The canter half passes covered much ground. Overall Anna rode a very strong test but the mare could be lighter in the bridle.

"I never thought of any individual medals coming here," said a beaming Abbelen at the press conference. "We always want to achieve a team medal I could not be happier with my silver. I cannot it believe it yet." Anna, who is in her last year as a young rider, said this was "the perfect finish" of her career as a youth rider.

Dutch Jasmien de Koeyer and the 8-year old Dutch warmblood Esperanza (by Desperados x Krack C) ensured that the Young Riders Kur to Music had some excitement to it as she was the last rider to go, defending the home flag. She already won team silver and individual test bronze and of course aimed for more medal glory in the freestyle. 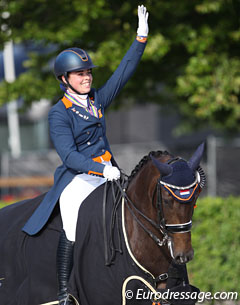 Riding to very dramatically arranged filmic music, De Koeyer and her long legged refined mare rode wonderful half passes and huge trot extensions, but there once was a break into canter in trot. The shoulder in left missed some self carriage and overall the trot was ridden with much reliance on the curb for support. The extended walk was very nice and the collected walk and turn on the haunches were well executed. De Koeyer rode four tempi changes on the circle. The right half pirouette was a bit unbalanced but the canter half passes were a highlight. The mare's youthfulness started to show at the end of the test as she began to canter with straighter hindlegs, no longer flexing the hocks that well and taking on the weight. Overall the test was very active, fresh and rhythmical but the mare needed more lightness in the bridle to score even higher.

"I really rode with the knife between my teeth. I wanted to get bronze and I even had silver in my mind. My goal was to ride a peak performance. It is great when everything comes together," said a bubbly De Koeyer afterwards. "The trot was really good and the pirouettes were good today. We got great points for trot. She is still a very young horse. I have much admiration for her. It was only her second time performing to this music. This was the most I could achieve with her at this point" 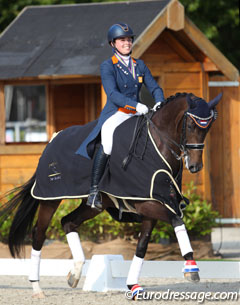 Jasmien is also in her last year as a young rider and wil make the transition to Under 25 level next year. "I believe Esperanza will be able to shine more at Under 25 level. She knows all the Grand Prix movements by nature. I'm just going to wait until she does everything well. Only the piaffe still needs some brushing up."

The 2017 European Children, Junior and Young Riders Championships concluded on a sunny August 13 afternoon. The 2018 European JR/YR Championships are scheduled to take place in Fontainebleau, France, on 9 - 15 July 2017.