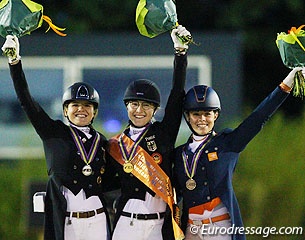 German Hannah Erbe has proven that making the transition to Young Riders' level this year was pretty much smooth sailing for her. Aboard her 10-year old Carlos, the 2016 European Junior Riders Championship claimed the individual test gold medal with a 77.658% earning ride, leaving all competition far behind her. Stable and team mate Anna-Christina Abbelen landed the silver, while the Dutch Jasmien de Koeyer finished with bronze after a recalculation twist.

Sixty-two competitors out of 66 originally entered contested the individual test, which was judged by Stukelj, Ringmark, Guerra, Ardu, and Tornblad. As the class was so big, it was again divided into two groups; the first one going on Friday, the second one on Saturday 12 August based on a full random draw. For the Young Riders the die were only cast on Friday with all three podium place-getters riding early in the morning drizzle. The weather has been a bit of everything in Roosendaal with lovely sunshine on the first day, heavily overcast and sparse rain showers on day two and beautiful sunshine on day three. On Saturday, however, it was miserable drizzle all morning, yet it wasn't cold. 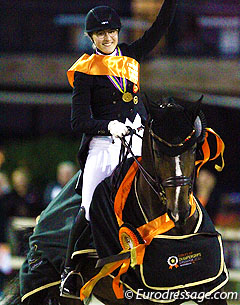 Hannah and her Rhinelander gelding Carlos (by Carabas x Weltmeyer) cruised to the victory in the individual test. Her tall dark bay gelding has incredible balance and self carriage in the trot work, always staying up in the bridle and light in the contact. The half passes were swinging, but there was a lapse in the rhythm in the extended trot. The third extension Erbe rode with more care and equal expression. In the extended walk Carlos has good overtrack but not the best rhythm. Also in the collected walk he could be even more elastic in the topline. The canter work is outstanding with super straight tempi changes. The canter pirouette right had a slight loss of balance, but overall Erbe and Carlos simply made everything look easy. They executed an excellent halt at entry and final halt signaling that they are ruling the roost. The judges rewarded the test with 77.658% and placed her first unanimously. Their marks ranged from 75.395% to 78.816%. 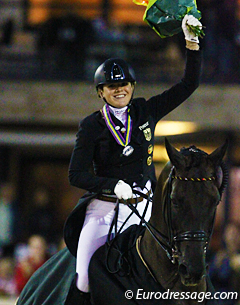 Anna-Christina Abbelen, who is Erbe's stable mate at coach Heiner Schiergen's barn, finished second with 73.816%. Aboard the 11-year old German Sport Horse bred mare First Lady (by Florencio x Donnerhall), the 2014 European Junior Riders Champion emphasized on very accurate, careful riding and thereby lost a bit of dynamics in trot. Still the black mare was very regular in the traversal movements and the extensions were correct but conservative. The trot tempo could have been a fraction higher. The mare has a big sweeping canter and showed a lovely left pirouette, but the right one was on the forehand. The tempi changes were all uphill and ground covering, but needed to be straighter in the body. Overall First Lady could chew more on the bit and be a bit lighter in the bridle for even higher scores. The judges' marks for Abbeen were quite in unison with no big differentiations, but interestingly judge Tornblad had her in ninth place with 72.763%. 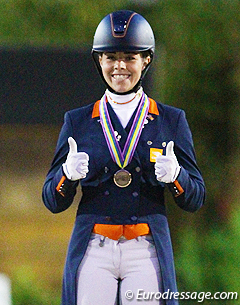 Dutch Jasmien de Koeyer and the 8-year old KWPN mare Esperanza (by Desperados x Krack C) finished in third place and on the bronze step of the podium. The pair was fourth to go early in the morning, but looked fit and fresh. In contrast with the rushed, over tempo team championship test, De Koeyer now really had her young mare together and rode with much more peace and tranquility through the exercises. The scopy moving mare was less rushed in the extensions and showed an brilliant extended walk. The first canter pirouette was unbalanced, the second was better. Esperanza is uphill in her tempi changes. Initially a fifth place appeared on the electronic running score board, but after twenty minutes De Koeyer's marks had been corrected to 73.263% which bumped her into the bronze medal position, overtaking not only Semmieke Rothenberger but also Luca Michels. De Koeyer's paper sheet scores, which are the officially correct ones and not the electronic computer scores, calculated to her final mark of 73.263%. 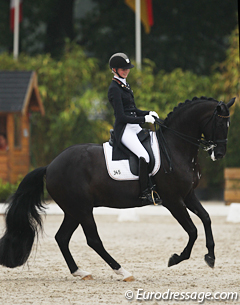 With De Koeyer's recalculated scores German Semmieke Rothenberger lost her bronze medal and ended the total German dominance on the podium. Rothenberger and the 15-year old Danish warmblood mare Geisha (by Gribaldi x Weltmeister) had gone back to the drawing board after a team test under par and fixed the shaky contact with the bridle. Semmieke had the trot much more together and held the black mare in a more consistent bridle contact. The trot work was very flowing, but in the rein back Geisha dragged her feet a bit. The trot half passes were lovely. In the extended walk, the mare could not achieve sufficient overtrack. The right canter half pass needed a bit more collection, the left one was good. Also the pirouettes were better today with the left one being the best one. Also the four tempi changes were well ridden, but on the diagonal of the three tempi changes, the mare began bopping her head again and in the final extended canter she looked sour despite producing good power from behind. With 73.237% Rothenberger was just a fraction of a point behind De Koeyer and for the first time since 2013 she was not on the podium for an individual medal! 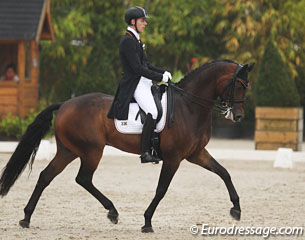 Germany's fourth team rider Luca Michels and his 9-year old Rhinelander gelding Rendezvous (by Riccione x Weltmeyer) placed fifth. The entire German team had sandwiched Dutch De Koeyer in the top five. The gorgeous bay gelding has a very elegant trot with lots of elasticity and suspension. The trot extensions were beautiful but in the left volte the horse lost the regularity in the stride length and became a bit too passagey and slow in the rhythm. In the extended walk the horse needed to relax more and stretch the topline but the overstep was fine. In canter the horse was uphill in the lengthenings, the right pirouette was the best one and all tempi changes worked, though it stood out that the ones to the right were crooked. The pair scored 73.210% to finish fifth.

The prize giving ceremony for the individual test took place in the dark at 21.h30 with the floodlight barely illuminating the arena and literally unable to put the medalists in a proper spotlight. The Kur to Music finals, in which another set of medals are to be won, will take place on Sunday, the last day of competition.