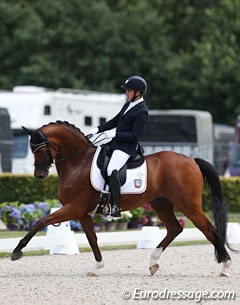 Anna Zibrandtsen's Oldenburg gelding Quel Filou moved into a provisional first place in the 6-year old Preliminary test on the first day of competition at the 2017 World Championships for Young Dressage Horses in Ermelo, The Netherlands. On Thursday afternoon 3 August 2017, Spanish Severo Jurado Lopez steered Quel Filou to an 8.98 total score to lead the way in the first group of 6-year olds; Red Diamant is standing second and First Ampere is third.

For incomprehensible reasons, the show organisation in Ermelo decided to divide the participants of the the preliminary test into two groups, spread out over two days. Not only has this caused major overlapping with the 7-year old division (spectators had to decide which division to watch, either the 6-year olds in arena 2 or the 7-year olds in the main stadium). Furthermore, this break in the class creates an unlevel field of play with the horses in group 2 starting under fresh conditions and with the judges already having a group to compare with and scores to use as reference point.

Andreas Helgstrand's number one stable jockey Severo Jurado Lopez was the first rider to go in the 6-year old preliminary test aboard Quel Filou (by Quaterback x Stedinger x Lord Sinclair). Helgstrand got the bright bay gelding in a horse deal swap (for Grand Prix horse Dragao) from Luxembourg based banker Patrice Mourruau, who had bought the gelding at the 2014 PSI Auction for 1 million euro. Under Sascha Schulz Quel Filou won the silver medal at the 2016 World Young horse Championships. Schulz now has the ride on Dragao and Quel Filou moved to Denmark to be immediately sold to Danish Grand Prix team rider Anna Zibrandtsen. Quel Filou is bred by Aloys Hinxlage. 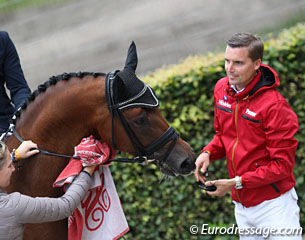 With Zibrandtsen watching on the sideline, Jurado Lopez and Quel Filou produced an excellent round in which the skilful riding of Severo made it count. The trot work was elastic, springy and forward but lacked bending on the voltes. Also the balance still needs to improve more in the lateral movements. The trot extensions were superb. In the extended walk the horse was supple and covered much ground. The flying changes were still a bit wild, but the canter was uphill and energetic. The transition from canter to trot was difficult and went via walk.

The judges panel, consisting of Susan Hoevenaars, Sandy Phillips, Susanne Baarup, and Christoph Hess, rewarded Quel Filou with an 8.8 for trot, 9.2 for walk and canter, 8.5 for submission and 9.2 for general impression. The total of 8.98 proved high enough to maintain the lead throughout the afternoon. 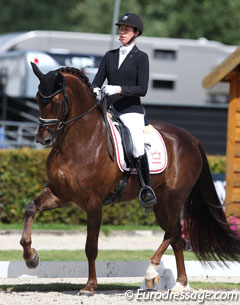 The gorgeous liver chestnut mare produced an impressive side silhouette in trot: nicely up in the bridle, naturally cresty and good engagement from behind. When assessing the mare from behind, one would like to see the horse step under even more. The walk is fantastic, with very beautiful, big strides and much relaxation. Also in canter, Red Diamant proved her rideability: balanced counter canter and two good flying changes.

The mare became a favourite of the judges and scored 9 for trot, 9.2 for walk, 8.7 for canter, 8.5 for submission and 9 for general impression. 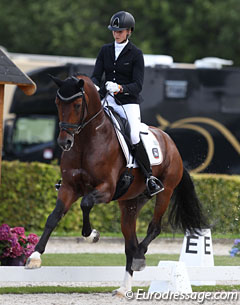 Tessa Frank and Helmut von Fircks' delightful Hanoverian licensed stallion First Ampere (by Ampere x Weltruhm) had to settle into a provisional third place with 8.86 points. The bright bay stallion was probably the best horse of the day, quality wise, but there were a few niggly bits in the test.

Overall First Ampere gave a great impression. He was soft and light in the bridle, but could stay a bit more consistently up in the frame. but the horse got distracted and neighed a few times. The trot work was big with much suspension and he kept a very good cadence also in the lateral movements. The extensions were delighful. Also the extended walk was very good with super clarity in the rhythm. The canter work is strong and engaged from behind, but the flying changes were shaky, especially the second one which was very crooked. 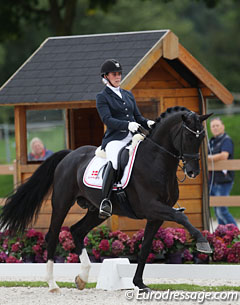 Danish Anne Marie Hosbond made an impression on the muscled and chunky Danish warmblood stallion Straight Horse Don Tamino (by Totilas x Don Schufro). Bred by Eva Götzsche out of Don Romina, the dam of Sezuan, Don Tamino is spitting image of Totilas with the same impressive front. He has exceptional freedom of shoulder and beautiful articulation in the front leg.

The trot was scopey, well suspended and rhythmical, with very good crossing of the legs in the traversal movements. The big curb on his right hock is a distraction, though, and overall the horse would benefit from developing more strength from behind. The walk was very good, but he could be a bit more electric in his stride. The canter was uphill and very expressive. The flying changes worked well. 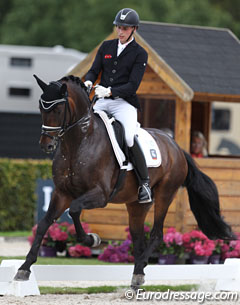 Hof Kasselmann's stable jockey Frederic Wandres travelled to Ermelo with Sir Skyfall OLD (by Sandro Hit x K2) for the second consecutive year. After finishing 8th in the 5-year old Finals in 2016, the pair now seeks to improve on that position in the 6-year old division.

Owned by Anna von Staff-Reitzenstein from Bad Rappenau in Germany, Sir Skyfall OLD impressed with his very supple trot and good flow from one lateral movement into the other. The extensions had good over step and lengthening in the frame, but overall the horse was ridden a bit too up tempo. The dark bay stallion has a big walk with massive overtrack and a good clarity in the 4-beat rhythm. His canter is very uphill with lots of energy, but it lacked some collection.

The second group of 6-year olds will compete on Friday afternoon 4 August 2017. The twelve best scoring horses will move on to the Finals on Sunday 6 August. The three highest scoring horses in the consolation final on Saturday will also be eligible to compete in the Finals.

Eurodressage's Astrid Appels is on the scene taking photos at the 2017 World Young Horse Championships - If you are interested in prints or digital files for your social media, email us.