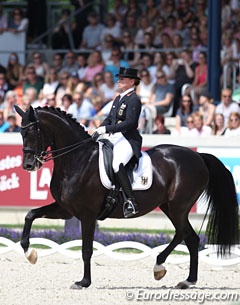 It is always said that dressage is complicated. When Isabell Werth won the Grand Prix Kur to Music at the 2017 CDIO Aachen for the eleventh time in her career on Sunday noon 23 July 2017, she made the fascination of dressage tangible with her Oldenburg-bred mare, Weihegold. Sönke Rothenberger shifted into another gear to place second, while Laura Graves dropped from a Special victory to a third place in the freestyle.

You could hear a pin drop when Isabell Werth and Weihegold entered the Deutsche Bank stadium. Then, the sound of cheerful Italian pop melodies that accompany the freestyle routine of the two World Cup winners began and Weihegold started to dance. Dressage can be so simple: From the passage into the piaffe and back out again, back in, back out, totally in rhythm, one step like the next, totally relaxed. There is currently no other horse in the world that can score  as highly as the Oldenburg-bred Don Schufro daughter does when she is faultfree. As Dr. Evi Eisenhardt, Chief Judge at C, explained: “My colleagues and I wished we could have awarded 11s and 12s today.” Among others, that is namely what they would have awarded for Weihegold and Werth’s transitions. The mare didn’t make a single mistake throughout the entire freestyle. The result: 89.675. After the final salute, the silence was broken. The crowd exploded and gave the six-time Olympic gold-medallist standing ovations.

Werth confirmed after her ride: “I had a super feeling today. She was by me from the first to the last moment, we were in perfect harmony. I wanted to carry on where we left off at Omaha today (where she won the World Cup Final in the spring with the same freestyle routine, editor’s note) and I think we succeeded in doing so.” 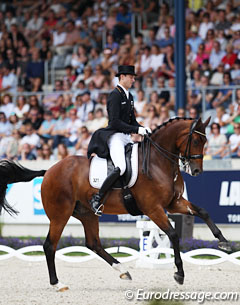 Here, the judges also wished they could have awarded some even higher marks, namely when Sönke Rothenberger and his KWPN gelding, Cosmo, flew through the dressage arena in extended trot. The just 10-year-old Van Gogh son showed his full potential today, which comprises of much more than just his extended trot.

Sönke Rothenberger: “I am delighted! Today, Cosmo demonstrated the extent of his potential for piaffe and passage!” And Sönke’s mother, Gonnelien, who among others won Olympic silver with the Dutch Olympic dressage team in 1996, confirmed this: “I think Cosmo demonstrated where he is headed, today.”

Indeed the career of the 22-year-old and his 10-year-old gelding have already made a vertical take-off: From the Young Riders camp, to the first Grand Prix starts, through to the first team appearance at the CHIO 2016 and from their straight on to claiming team gold at the Olympic Games in Rio. Last year, the pair weren’t able to compete in the freestyle because they were ‘only’ the fourth best German pair. And now they delivered a score of 85.750 percent and came second in the Aachen Kur in 2017. Ahead of the rider, who finished fourth at the Olympic Games last year. One could say it has been a “cosmic” rise, whereby there is no end in sight.

Graves and Verdades Slot in Third 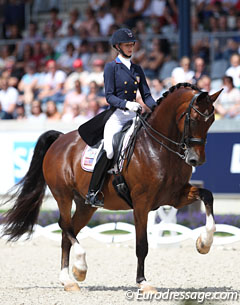 Third place went to the challenger from overseas, American Laura Graves with Verdades. The pair’s career is just as steep as Sönke Rothenberger and Cosmo’s. They competed at the Soers for the first time in 2014. Nobody knew them. Afterwards the former hairdresser, who gave up her job for her horse and her dream of riding on the international dressage circuit, was the talk of the town. And now, three years later she travelled to Aachen with a clear goal: To beat Isabell Werth! Yesterday she succeeded in doing so in the Grand Prix Spécial.

But in the freestyle, this was not to be. The 15-year-old KWPN gelding by Florett As was very strong at the beginning, but then the mistakes started creeping in in the canter tour, which pushed the final score down to 82.550%.

Laura Graves wasn’t able to hide her disappointment, which was understandable! “I just hope that I will be invited back,” she joked during the Press Conference. The Show Director, Frank Kemperman, assured her sincerely: “We will be delighted to welcome you back next year.”