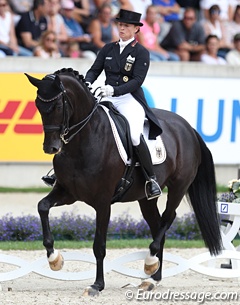 Isabell Werth once more proved that she is the measure of all things this 2017 show season after winning the 5* Grand Prix at the 2017 CDIO Aachen on Thursday 20 July 2017. Aboard her number one Weihegold, the German Olympian produced a fantastic ride that received a generous score of 83.171% to rank first ahead of Laura Graves and Sönke Rothenberger.

Aboard Christine Arns-Krogman's 12-year old Oldenburg mare Weihegold (by Don Schufro x Sandro Hit), Werth started off with beautiful, well carried trot half passes and a good halt for rein back but some hesitant steps. The trot extensions lacked elasticity. The passage work is the mare's forté: quick, lightfooted steps, engaged hindlegs reaching far under the body. The first piaffe has a superb rhythm but the hindlegs could move more under. The extended walk was ok, the collected got very close to becoming lateral (still scores of 7.0 - 8.0). The second transition into piaffe was outstanding but the piaffe slightly moved forward. The canter strike off was crooked (6.5 - 8.0!). Weihegold is very steady in the bridle but still occasionally bares her teeth. The canter work is all very secure and confident but the mare does not have the biggest canter which makes other horses in the field stand out more in this gait. The zig zag and one tempi's were all very well ridden but could have more ground cover, the pirouettes are tiny but not the scopiest. The final centerline was outstanding. 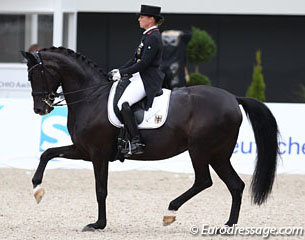 Isabell Werth is the measure of all things this year and even though Aachen tried to play up the duel between her and Graves for media attention, the judges make it obviously clear that the German stands far apart, high at the top. Quality-wise Weihegold is not that much better than her closest rivals. Certain movements she executes with absolute brilliance (i.e. the passage) but she is also just average on several points (extended trot, pirouettes, short one tempi changes). The complete package is not there, but Werth's riding on her is of course thrilling and what makes the pair as successful as they are.

Graves and Rothenberger Thrilling, but Not at the Top of their Game

While the media eagerly promoted American Laura Graves as Werth's greatest challenger for first place, in Aachen the Florida based rider was not able to live up to those expectations, even though the judges more than willingly gave her the big scores. The fact that her technical marks ranged from 76.600 to 82.500 tell all. 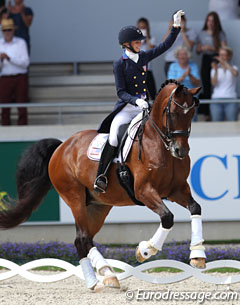 Laura and her 15-year old Dutch warmblood gelding Verdades (by Florett As x Goya) are a pleasure to watch. The softness, the lightness and harmony are exhilarating and Verdades has amazing highlights in the trot extensions and half passes, tempi changes and pirouettes. However in the Aachen Grand Prix the horse had the nose consistently behind the vertical and in piaffe he does not take any weight on the hindlegs despite a good rhythm. The rein back was fantastic though. In the second passage the horse lost the collection and the second piaffe was ridden all too carefully. Big mistakes in the two tempi changes were the point killers of the ride. The one tempi changes were good again but have been more uphill before. The pirouettes were lovely and the final centerline was still fresh and active. They scored a total of 79.514% they were second.

Sönke Rothenberger and his 10-year old Dutch warmblood gelding Cosmo (by Van Gogh x Landjonker) are expected to become Werth's biggest rivals and the very sensitive bay has not shown enough maturity in the Grand Prix to make that happen. 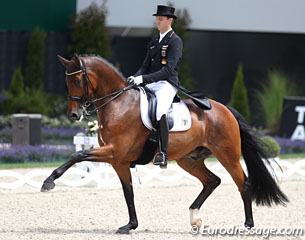 In Aachen, however, the horse showed incredible poise and psychological readiness. Rothenberger was finally able to keep his half-halting discrete with quiet hands on the withers. The half passes were flowing, the trot extensions phenomenal. In the first piaffe, though, the horse was toe-dragging with the right hind and in the second he was too forward. The passage has lots of lightness and spring but was not always entirely even. The canter work was excellent with a beautiful extension, very straight two tempi changes, and big ones. The pirouettes could develop more airtime and sit. The horse was still energetic on the last centerline and the rhythm in the piaffe at x was good but the right hind slightly swung out from under the body. They finished on 78.757% with marks going from 76.400% to 80.600%

Dufour Throws Herself into the Mix

After achieving stellar personal best scores of over 80% at the Danish Championships a week ago, Cathrine Dufour has thrown herself into the mix as an individual medal favourite for the 2017 European Championships. While inflated scoring at National Championships have become a common practise in the sport, it was certainly interesting to see if Dufour could live up to those marks in the lion's den in Aachen. 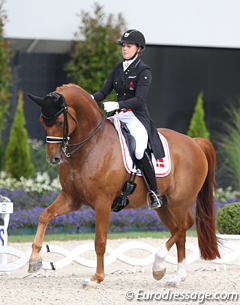 Dufour's 14-year old Danish warmblood gelding Atterupgaards Cassidy (by Caprimond x Donnerhall) has served more than his purpose. The young Dane claimed the double European Young Riders Champion's title on him - her goal in 2012 and 2013 - but now the funky chestnut is also proving his worth as a Grand Prix horse. Dufour has been chiseling and chiseling on this horse of which they once thought he would never make it at Grand Prix. In Aachen he showed his best form so far. While the piaffe is still a weakpoint and in passage he tends to go wide behind despite his activity and spring, the improvements were definitely in the better frame in which he was presented. The horse was up in the bridle and had the nose slightly in front of the vertical in most exercises. Dufour was able to show a textbook extended canter in which not only the stride length increased but also the frame opened up. The contact was at all times light, but Cassidy got a bit restless in the mouth and opened it regularly.

The halt at entry was not immobile, the half passes were ridden carefully. The walk was well regulated. The first piaffe was timid, the second had a backstepping tendency. In passage Cassidy is very electric off the ground but the hindlegs never truly reach under the body. The extended trots were excellent and so were the super straight one tempi changes. The pirouettes are a bit flat, but small. Overall Dufour and Cassidy were a pleasure to watch and the judges rewarded her accordingly with a 77.414% score (marks ranging from 75.200 - 81.000!).

Reynolds Into the Top Five

The top five was completed by Irish Judy Reynolds on her 15-year old Dutch warmblood gelding Vancouver K (by Jazz x Ferro). Since the 2014 World Equestrian Games in Caen, Reynolds hit the right nerve with her temperamental Jazzy Vancouver and the horse finally opened up and relief on his rider. The pair has been getting scores increasing with each show since then and have been a record setting dressage rider for Ireland. 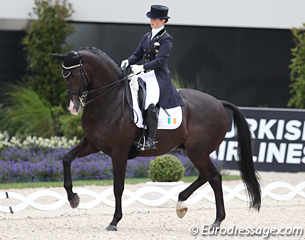 In Aachen Reynolds impressed with her very light aids and her feeling for riding such a hot-to-trot horse. The black is ground covering in the trot lengthenings but gets a bit hasty. The passage is a highlight with his suspension and beautiful side silhouette. In piaffe he still gets tense and on edge despite the nice sit. The tempi changes were straight, the pirouettes lovely. They scored 75.257% and had all judges on the same wavelength with their marks.

What certainly stood out this year in Aachen is that all top ranked riders earn their scores with beautiful dressage. The days of push-and-pull almost seem to be gone, with only a few riders still getting credit for their fake contact and stiff toplines, but in general the real stars that shine are those who do not need to control their horse through the bit but make their horse reach unprecedented levels of gymnasticism through correct training. With the exception of Cosmo who is a gifted mover by nature in all three gaits, Weihegold, Cassidy, Vancouver and even Verdades are horses that have come to excel at the world's top through effective, correct training! It will be interesting to see what the Grand Prix Special on Saturday will have to bring.