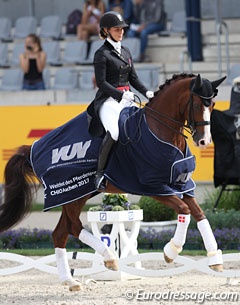 Danish Anna Kasprzak and her brand new ride Quarton impressed the judges on the first day of competition at the 2017 CDIO Aachen on Wednesday 19 July 2017. The duo danced to victory in the Prix St Georges with a 72.237%. Spanish Juan Matute Guimon was second and German Helen Langehanenberg finished third.

Kasprzak acquired the 8-year old Swedish warmblood Quarton (by Quaterback x Don Schufro) only two months ago, but the pair is already blazing a trail. Quarton stood out with his incredible freedom in the shoulder, especially in trot and very good extended walk, but the horse lost the regularity in the rhythm in the voltes in trot. Although the tempi changes were ground covering, the horse swayed in the hindquaters.

The judges for the Prix St Georges - Asmyr, Wessels, Stukelj, Ebert and Fransen-Iacobaeus - preferred the test of the liver chestnut and scored him 72.237%. He placed first with three judges, one ranked him third and one sixth. The marks went from 70.263% to 73.816%. 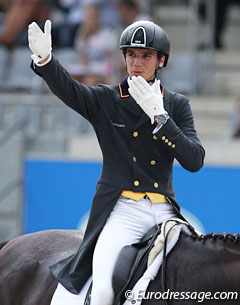 "I wanted a successor for Pepe (Donnperignon),” said Kasprzak about her decision to buy Quarton. She praises the horse's excellent character. “He is great fun to ride. He is so uncomplicated, not only under the saddle, but also while handling him.” It was the horse's first appearance in Aachen. "He was a little jumpy when he entered the stadium,” his rider admitted, "but he carried on going all the same."

Spanish Juan Matute Guimon and Yeguada de Ymas' 10-year old Hanoverian gelding Dhannie (by Don Crusador x Weltmeyer) landed second place with 71.947%. Their marks went from 69.737 up to 74.211%. The pair showed incredibly routine, especially in the trot work. The stride length in the extended trot was not always even and the canter half pirouettes were slightly lacklustre, but Dhannie showed good bending and flow from one movement to the other.

Helen Langehanenberg and the 8-year old Hanoverian mare Brisbane (by Belissimo M x Furst Heinrich) completed the top three on a 70.816%. Her marks went from 68.553% to 74.079%. The chestnut mare is not the flashiest mover and could show a happier, more interested expression on her face, but she willfully did the job and was attentive to her rider's aids. A few small booboos kept the score from going higher. She lost the canter after the first half pirouette and while the tempi changes were big, the ones to the right were crooked. 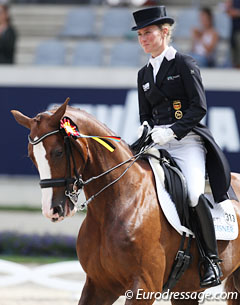 Langehanenberg tied in third place with Hubertus Schmidt on the tall and impressive 8-year old Westfalian stallion Escolar (by Estobar x Furst Piccolo). The bay stallion shines in the canter work, with huge uphill strides and a massive extended canter, but the bay still lacks considerable self carriage. Escolar showed much elasticity and scope in trot, but does not yet really take the weight on the hindquarters. This showed in the shaky pirouettes. The tempi changes were ground covering but needed to be straighter in the body. They also scored 70.816% with the judges being quite in unison.