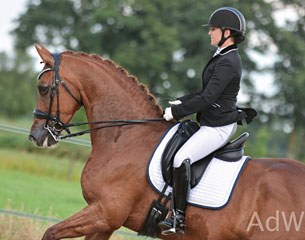 Tracy Wyngard-Gill is based in the United Arabic Emirates and the hot climate is not ideal for horses. She has been able to keep them in peak condition with Equine 74 Gastric, a safe and effective alternative to treat horses for recurring ulcers. Gastric ulcers are a common place problem for stabled horses and as a believer in the best horse care, Tracy went in search of a natural product for long-term ulcer management.

"Due to climate and conditions here in the Middle East, it is tough on the horses. "We have to be kidding ourselves if we don’t acknowledge that it's not optimal for horses with the climates that we have here. We owe it to them to ensure we do all we can to keep them as healthy as possible," said Tracy Wyngard-Gill.

Equine 74 Gastric specifically captured her attention when she had had some really concerning ulcer related issues with a horse that was in training with her. "Although he was through the worst of it, I was looking for a solution for his long term health," she said. "I’m also very aware that ulcers are a big issue with stabled horses in general, especially in our competitive athletes."

Wyngard-Gill had read a review of the product on Eurodressage and was triggered by Tinne Vilhelmson-Silfven's testimonial. 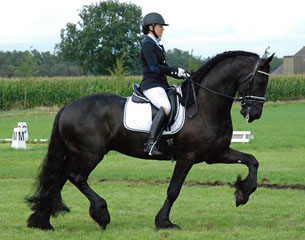 "I then did some more research on the product itself and was extremely impressed by all the reviews," Tracy stated. "As it's not something that is available in the UAE, I got in contact directly with Equine 74 Gastric and was fortunate enough to speak directly with Christian Dietz. It was great to have the chance to speak to him directly about his product, the benefits and how it works. I immediately ordered a year's supply for the two horses that I thought it would most benefit."

Sport horses often suffer from gastric ulcers and in Tracy's case her Friesian sport gelding Pabe was having intermittent colics that were initially related to impaired disfunction of the gut. After elaborate investigation they discovered that the ulcers they were battling was actually the cause. "He had to have an intense treatment of medication to treat the severity of the ulcers initially, both in the fore and hind gut, but we have been able to manage him since on Equine 74 Gastric," Tracy added.

Wyngard-Gill realized that medication, like omeprazole, is no long-term solution.  "Omeprazole products are effective in the treatment of ulcers and in stressful situations I may use it on occasions to support my horse, but I don’t like to have to use chemicals/medicine if I can help it; not to mention the long term costs."

To prevent ulcers in her horses, Tracy tried Equine 74 Gastric and was blown away by its results. Equine 74 Gastric is a natural product which buffers stomach acids instead of just blocking them and it creates a healthy pH- balance in the horse's stomach. 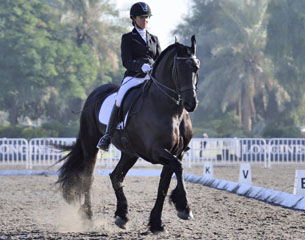 "I have tried a few other gastric aids/supplements and I’m sure they helped to some degree, but I’ve not really seen a big difference in the horses," she said. "The improvement was undeniable with the Equine 74 Gastric: character, suppleness and even general overall health."

Tracy has five competition horses in training in Dubai, and along with her close friend and client, Liisa Kirkwood, she has a few exciting young horses starting up in Holland. The stars of the barn are two rising small tour horses:  10-year old KWPN bred Calypso (by Jazz x Negro) and the 8-year old Dutch mare Evita (by Oscar x Jazz).

"I started feeding Equine 74 Gastric in October last year, two weeks after I spoke to Christian Dietz which was the time it took to ship the product in," she explained. "The other horse I started on Equine 74 Gastric was Evita, who is very highly strung. She showed a few characteristics that are often indicative of horses with gastric discomfort. When she started on the supplement within 2 weeks the difference was so significant! She was easier is her character, more relaxed and accepting the training more readily. She was also more supple in her body in general. I had quite a few people asking if there was something new I was feeding as she was noticeably looking and feeling great."

Wyngard-Gill no longer needs convincing that Equine 74 Gastric works and she has every intention on having all her competition horses on the product in the near future.

"Although, I know it's often necessary to treat acute cases with omeprazole products initially, I don’t think it can be good for the horses to be on this long term. This is why Equine 74 Gastric is so beneficial," she said. "It is all natural and absorbs excess acid whilst still allowing the body to have enough acids to do its natural job in the digestion process of the horse. It’s a “long term” solution for gut health. It’s great to have such an affordable product that is so effective!"