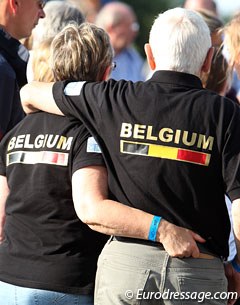 The dressage committee of the Belgian Equestrian Federation (KBRSF) issued a statement today in which it addressed the riders' accusations of changing the rules, malcommunication and whimsical government. In the statement, the committee points fingers at the riders' own responsibilities and decision making, washing its hands in innocence.

A wave of upset spread in the Belgian dressage community when the federation sent out a statement right before final Belgian selection trial for the World Young Horse Championships.  At the beginning of the 2017 show season the Belgian selection criteria were very clear, working with a straight forward ranking based on points depending on the placings at the show.

The federation had decided last minute that it would also consider scores achieved in CDI young horse classes as well. Furthermore it notified the riders that minimum score criterium set by the FEI is 75% (5-6yo) and 70% (7yo).

The judging directive for young horse tests in Belgium, however, is based on technical riding and not on the quality of the horse, which makes it hard to achieve the FEI standard.

Due to these changed criteria, owners and riders have voiced their upset with the federation, which has refrained from announcing the two horses per age category that will go to Ermelo. The KBRSF Dressage Committee includes Marcel Nejszaten, Philip Brison, Anne d'Ieteren, Freddy Leyman, Mariette Withages, Didier Deschauwer, Aline Kennof and Wim Verwimp.

At the beginning of 2016, at the end of 2016 and at the beginning of 2017 the KBRSF Dressage Committee sat together with a select group of riders, trainers, owners, judges to debate the young horse test system in Belgium. One of the conclusions was that, by unanimous request of the athletes, trainers, owners, no longer to judge according to the FEI protocol, i.e. not only to judge on three gaits, submission, and potential, but to also add a technical part (like with the 7-year olds). Therefore, the KBRSF Dressage Committee does not lye at the base of this change, but has operated to execute this request. This way of judging was confirmed in the meetings at the beginning of the 2017 show season.

In 2016 (before the start of the competition) the KBRSF Dressage Committee published the selection rules, which are a slightly modified version from 2015 (no longer the sum of %, but of points/ranking) and this was posted on the Equibel website on request of the riders, trainers, owners. This publication on Equibel also appeared at the beginning of March 2017, as well as on the website of both leagues. So far ahead of the first qualifier for the championship.

It is obvious that for all continental and world championships, the FEI publishes minimum eligibility criteria. For information, this FEI rule was published in 2015. There is no reason to make publicity for this, as these selection criteria apply for all disciplines when it concerns an FEI championship such as the one above.

The KBRSF Dressage Committee sent a reminder and not a new rule nor alteration of the rules. This email was sent on request of several members to notify the riders, trainers, owners of their different obligations preceding selection which, as we see fit to remind you, is the case for all disciplines at all levels of FEI Championships.

Therefore, neither the KBRSF Dressage Committee, nor the KBRSF, nor its leagues can be held responsible for "bad communication, nor for so-called changing of a rule."

The statement does not address the fact of the rule change that CDI scores will be included for team selection. To this point the Belgian Equestrian Federation still has not officially announced the selected horse-and-rider combinations that will represent Belgium at the 2017 World Young Horse Championships. The definite closing date is 17 July 2017.