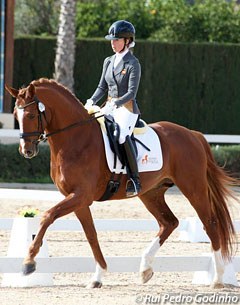 Three days ago German based Spanish Olympic team reserve Borja Carrascosa spoke out against the Spanish team selection criteria for the 2017 World Young Horse Championships as they stipulated a mandatory start in the "Masters" at the Spanish Championships in Segovia in June. For combinations living abroad this meant a huge journey with young horses for one shows, while scores from young horses classes at CDI's did not seem to count. Carrascosa and his 6-year old Forbes (by Fidertanz x Rohdiamant) achieved marks at CDI's higher than the best scoring horse at the Spanish nationals.

With Carrascosa not afraid to speak out, Spanish rider Maria Albinana Sanz joined the debate stating that two years in a row, she was shunned by the selectors despite scoring some of the highest marks of the season on her sponsor Maria Jose Alvarez Mezquiriz' 6-year old Lario de Adama de Susa.

Already in 2016, Albinana and Lario were not selected for Ermelo as selectors preferred the lesser scoring pair, Juan Pulido and Furtwangler OLD.

"At the last moment we were left out of the national team while a pair that had hardly competed that year was chosen," Albinana stated. "Everyone at Adama de Susa decided to turn the page and be more proactive and positive the next season. We kept on working and showed the progress we had achieved (in 2017). We did it."

However, selectors again did not pick Albinana and Lario, who won the young horses classes at the CDI's in Valencia and Segovia with scores of 77.200, 80.00, 84.400 and 85.800 points, but finished only fifth overall at the Masters in Segovia.

"We do not want to be controversial, nor do we want to doubt the results and successes of the colleagues who have been selected, for which I am glad of course," said Albinana. "However, I find myself undermined by a decision by the RFHE technical team for the second, consecutive year, which I at least consider unfair. With a very similar evolution to last year, in 2017 I am again out of selection for the World Championship, despite having obtained the best results with lario. Twice when I go to the Masters my scores drop and that is given as excuse for not selecting me. This year the same thing happened again, when our results went down at the selection event, whereas other criteria seem to other combinations. We have filed a complaint with the RFHE, and at least want an explanation." 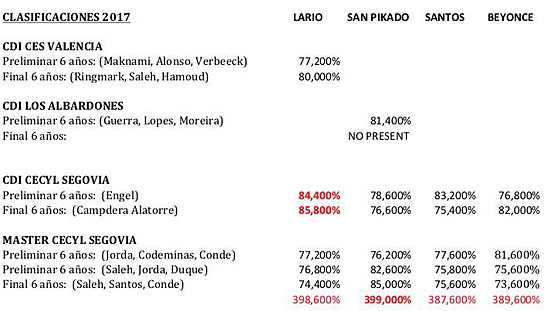 Albinana added that she rode at all obligatory competitions set by the RFHE technical staff and scored the best marks of all. She also competed at the Masters, even though she was unable to score as highly there.

"I wonder why? I find it hard to understand that I achieve very good scores throughout the season and when Lario and I arrive at the Masters, where apparently the team selection is decided, our scores drop by 10 points. Isn't it strange that at the Masters the scores are so different," Albinana concluded.

She further stressed that the federation should set clear, transparant criteria that are equal to all. "I feel that they are toying with us; that many of the decisions are already made beforehand." 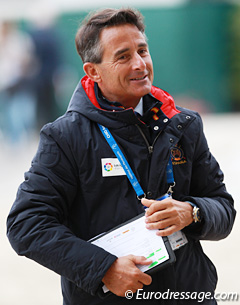 Some Spaniards believe that the Technical Dressage Staff of the Spanish equestrian federation, headed by Luis Lucio,  had too much influence in the organizing committee of the Spanish Dressage Championships, putting together specific judging panels that would reflect the choice of the staff.

For this Spanish Young Horse competition in Segovia and mandatory selection trial for Ermelo, no less than two judges out of three were allowed to be Spanish and sit on the panel to score the young horse classes and decide on the Spanish delegation for Ermelo.

Those that suspect meddling of the Spanish federation with the judging at the Nationals have created a video in which the Finals test of the top scoring 5-year old (Columbus TR - 82.200 pts) is compared to the third scoring 5-year old (Quinery - 75.800 pts). Both horses have been selected for the Spanish team for Ermelo, even though Quinery clearly showed mistakes in his test that did not seem to be considered by the judges (submission score 7.2). The panel of judges included Raphael Saleh (FRA, 5*), Paco Guerra (ESP, 5*) and Mariano Santos (ESP, 4*).

One day after the publication of the video on Youtube, the rider of Quinery pressured online radio outlet Rienda Suelta, which posted the video, to have it removed from the net. Rienda Suelta made the statement that, "it is not our objective to harm any of the riders, personally or professionally. The video was only to open the debate on the actions of the international judges who judged the test, as one of them did not punish or take into account the numerous mistakes that were made."

Spanish dressage aficionado Miguel Noguera Henriquez is one of the strong advocates who wants to see the RFHE Technical dressage staff purged. A close friend of the Alvarez family, he actively contributes to discussions on the future of Spanish Dressage on Facebook. For instance, in response to the removal of the Young Horse video, Noguera wrote, " why is so much done to protect those who do evil and to punish those who have done well? A discipline that covers and hides their problems is a severely sick discipline."

Noguera also cites the recent legal case of the young riders' duo Artur Alvarez and Maria Igualador, whom the RFHE tried to suspend for two months for bad behaviour at the 2016 European Young Riders Championships, as an example of how riders and the RFHE Technical staff continue to clash.

Spanish young riders Artur Alvarez Pou and YR team rider Maria Igualador were brought in front of the RFHE Disciplinary Committee and Tribunal for allegations of unsportmanlike and disrespectful behaviour in Oliva Nova. They were sentenced to a two-month suspension, but twice appealed the decision with RFHE, represented by their lawyer Bufete Cuatrecasas. They then took the case to the Court of Appeal of the Spanish Ministery of Sport, where they won. 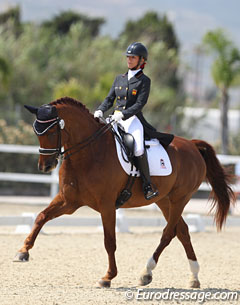 Maria Igualador was selected as an alternate and and ended up replacing Maria Moncayola on the Spanish team at the 2016 European YR Championships. In a court document with the run-down of facts according to the RFHE technical staff, it is mentioned that the RFHE decided on the allocation of the hotel rooms in the team hotel (as the majority of the team riders are minors) and Igualador was listed to share a room with team mate Sofia Pachon (20). Instead she chose to have her boyfriend and coach, Artur Alvarez Pou (25), in her room and Pachon had to find another room. In addition an minor incident took place during a team dinner, where Alvarez and Igualador did not pay their bill. The technical staff went to Igualador's room to settle bill and detected that the couple still shared a room. Team trainer Nicky Barrett asked the couple not to share a room and to follow the allocation of the rooms according to the federation's decision. Alvarez refused. In further conversations Alvarez addressed Barrett insultingly, disrespectfully and with a threatening and arrogant tone.

In his official testimony of the incident Francisco Corbi Soler, physiotherapist of the RFHE, stated that "the image of the Spanish team was jeopardized and it could have harmed the performance of the rest of the team. Such attitude is unacceptable in any high performance team."

In Sofia Pachon's official testimony, the Spanish young rider's team member said that, "as an eyewitness, I can only say that I have not at any time perceived or felt that coach Nicky Barrett has had any violent, excessive or abrupt attitude with any member of the team, but on the contrary, had shown that her goal was to help with everything and work together to make things go as well as possible. This sport event did not have the purpose of spending a week of vacations or with the couple, and therefore must be strictly adhered to the federation's program, because they are responsible for positive results for the country."

After the Europeans the RFHE Disciplinary Committee suspended the two for two months, but they appealed. The RFHE Tribunal, however, upheld the suspension. They appealed again by going to the Court of Arbitration at the Spanish Ministery of Sport.

On 26 May 2017 that court ruled in favour of Alvarez/Igualador, stating that, "there has been a misunderstanding in the sharing of the rooms, because it was not clearly explained to the defendants, and when the officials saw the irregularity, the selector/responsable, as she declared on July 19, said that they could stay there that night but Artur should leave definitively next morning the room. And it is obvious there was no resistance to the orders of the selector."

After a one year legal battle in three courts, the case came to a conclusion with the two riders not being suspended for two months. The Court of Arbitration saw no grounds for the sanction due to lack of proof and, therefore, ruled in their favour. 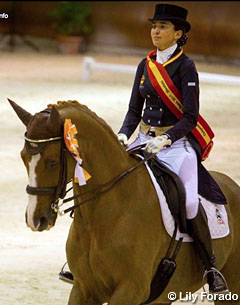 Spain's top Grand Prix riders Beatriz Ferrer Salat, Jose Daniel Martin Dockx, Jordi Domingo and Jose Antonio Garcia Mena have sent an open letter in which they expressed "the situation of general discontent with the way the disciplines is planned and governed."

Ferrer-Salat and Lauro Aguilo held a meeting with Luis Lucio at the Spanish Championships to discuss the general concerns and worries of the Spanish dressage riders, but Lucio did not share those concerns.  On 13 June the duo as well as Martin Dockx, and Garcia Mena met wtih Javier Revuelta, president of the RFHE, where a good dialogue took place and where the riders felt heard.

One of the suggestions the federation is willing to take under consideration is the appointment of a new team trainer for the Spanish Grand Prix riders. The riders in the meeting with Revuelta also advocated for a riders' committee that would regularly meet with the RFHE Dressage Director so they can agree on decisions taken instead of the unilaterial decision process that is happening right now. Revuelta was open to this idea.