Engermann and Dufour Go for Gold at 2017 Danish Dressage Championships 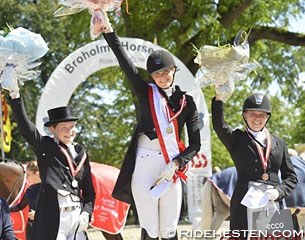 In the Grand Prix division Danish super star Cathrine Dufour and her 14-year old Danish bred Atterupgaards Cassidy (by Caprimond x Donnerhall) showed that they have reached a new level in their riding and the all-Danish judges panel richly rewarded the top star with personal best scores throughout the weekend. Dufour and Cassidy kept all competitions miles behind her after scoring 79.500% in the Grand Prix, 82.725% in the Special and 87.725% in the Kur to Music. Dufour earned her second, consecutive gold medal at the Danish GP Nationals. 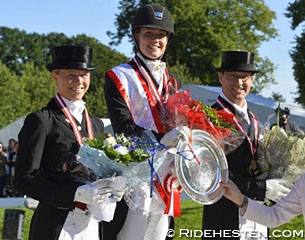 The silver went to Agnete Kirk Thinggaard, who needs not to worry too much about missing out on her new purchase Atterupgaards Orthilia (currently sidelined due to injury). Thinggaard's schoolmaster, the 14-year old Hungarian bred Jojo AZ (by Ginus x Justboy), is performing better than ever before and has also given his rider personal best scores in Broholm. They earned 72.300%, 74.471% and 80.950%.

British based Anders Dahl landed the bronze medal with his wife Fiona Bigwood's 13-year old American bred Hanoverian Selten HW (by Sandro Hit x Hohenstein). The duo was second in the Grand Prix (73.100%), fourth in the Special (73.392%) and fourth in the Kur (76.250%).

"It has been a truly amazing week," Dufour told Eurodressage. "We have changed a little in our passage work after Hagen, and it has really improved it! Our timing was perfect this weekend, and I really think we're at the top of our game.
The Grand Prix Special was a test of a life time, and today's freestyle was superb."