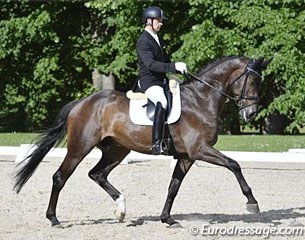 The Danish Equestrian Federation and Danish warmblood and Trakehner society have announced the horses that have qualified to represent Denmark at the 2017 World Championships for young dressage horses in Ermelo, The Netherlands, on 3 - 6 August 2017.

The Danish federation hosted its final young horse qualifier at the 2017 Danish National Championships in Broholm on 8 - 9 July, where the short listed candidates had to perform the preliminary as well as the finals test in front of the selectors.

Based on the results achieved in Broholm, the Danish team was picked. 12 horses ridden by 10 different riders have made the selection. They are:

The first reserve is Kut 'n' Move (by Imperio x Le Rouge) under Bettina Laisbo; the second reserve is Thybo's Laban (by L’Espoir x Michellino) under Maria A. Andersen