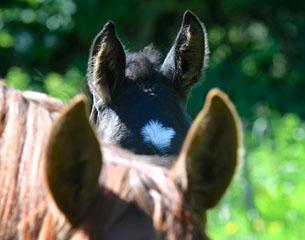 It always amazes me that – at least as far as I know – the world’s leading criminal organisations are not run by horsey women, for none other is as skilled at what I can only describe as money laundering, cunning subterfuge and elaborate deceit…

When a fellow breeder asked me to write about some of the tricks I have come across over the years (some of which I MIGHT have been guilty of committing myself), I was initially a little worried about blowing my cover, as well as that of my fellow criminal masterminds… but worry not, I put a picture of something horsey at the top of this blog entry, which is enough to guarantee that no non-horsey partner will ever read it.

So here, dear fellow horse addicts, are a few of the genius ways in which non-horsey partners can – nay must – be managed:

If we listen to what every single horsey woman tells her non-horsey partner, horses must be incredibly cheap to keep. A bit o hay, a bit of feed, it hardly figures. In fact the farrier and the dentist practically beg me to allow them to deal with my horses for free. Vet bills? What vet bills? (cue innocent batting of eyes)… somehow we manage to convince our partners that keeping a horse will be hardly any different from keeping your average hamster. And the amazing thing is, we seem to be getting away with it. It really is a waste that we horsey women are so busy with our equine addiction. If we were to turn our attention to the world of finance, we would probably make billions…

But how do we do it? How can the hundreds of pounds worth of vet and livery bills and their surely inevitably erosive impact on the family finances simply disappear from the face of the earth? It is a mystery… but here, dear fellow horse addicts, are a few tried and tested methods:

Hide the bills and spread the costs:

This is so obvious, I hardly need to mention it, but never, ever, let your non-horsey partner catch a glimpse of a horsey bill. I bury mine in the deepest pockets of my most moth-eaten Barbour, underneath clumps of treat crumbles, bailing twine, and undefinable vaguely smelly and sticky substances, in the safe knowledge that nobody, me included, would ever be brave enough to retrieve them from down there. When it comes to paying said bills, you need to get creative. Ask your vet if you can pay partly in cash, partly by cheque, partly in bank transfer, partly via paypal and put the rest on your credit card. On the basis that it is part of a vet’s job description that they have to deal with horsey women, this will hardly raise any eyebrows.

Which neatly leads me to this genius idea, which came from a very clever horsey friend (I really wish I could take credit for it…), the Tesco’s cashback (other supermarkets are available). For, my friend tells me with a dangerous glint in her eye, since when did our non-horsey partners ever have a clue about the actual cost of supermarket shopping? All that appears on the bank statement is the overall amount for the shop, horsey friend pockets the 50 pounds cutback, et voila, you only need to do that once more, and before you know it you’ve paid for a new set of shoes for your horse without anyone being able to trace that on your financial records. Worried about non-horsey partner smelling a rat when confronted with a sudden hike in food costs? Let’s face it, in a world where we have convinced the poor dears that a bag of top of the range feed balancer costs no more than – mumble – “a couple of quid”, it is perfectly conceivable that they can equally be convinced that your average weekly family supermarket shop will require you to remortgage the house…

Alan Sugar eat your heart out, when it comes to wheeling and dealing, nothing compares with a horsey woman in pursuit of a new set of matchy matchy numnah and bandages. And to afford aforementioned set, it seems only fair that something else in the horsey woman’s possession (or, indeed, in the possession of her family) must be sold to make room for it. Horsey women are easily spotted on eBay as the ones doing a roaring trade in second hand children’s designer clothes that their own children have grown out of (or, in slightly more desperate times, might have grown out of ‘very soon’, anyway) or their husband’s designer ties, cufflinks, or other easily hidden and packaged items. – Repeat after me: “No, dear, I have not seen your red Hermes tie in ages. No idea what happened to it. I am sure it will turn up!” and “Darling, that Ralph Lauren shirt was far too small for you, Mummy gave it to charity, we’ll have to go and get you a new one!” (try not to let them hear your evil chuckle)

“I told you weeks ago we are going to that show”

Another frequent source of potential friction in need of careful management is the time – particularly on weekends – horsey women spend with their horses. This is because non-horsey partners’ expectations of what one does on a weekend are steeped in hazy notions of perfect smiling families frolicking in a meadow, or perhaps visiting an art exhibition, or a National Trust home, just like they have seen on television, probably thinking “this could be us… if we didn’t have horses…”.

Horsey women know that any such ideas are preposterous, anyway, and that weekends spent (nay wasted) at home are invariably filled with mind numbing pursuits such as getting on top of the laundry (and I mean that in the literal sense) or hovering under the sofas, all the while thinking about the important and exciting horsey event we are missing, and the fun everyone else is having…

Careful management of your non-horsey partner can help you avoid all that frustration:

There is absolutely no point in telling your non-horsey partner beforehand about your plans to go to a weekend show. All that would do is give him enough time to be cross. And try to argue you out of going. Instead, pretend you mentioned it ages ago. The optimum time for that is about 5 minutes before you set off. Weave it casually into the conversation, as in: “You know the [insert name] show we agreed ages ago we are going to today, I am wondering whether to wear my blue or my black show jacket, what do you think, darling?”. On the basis that all non-horsey partners glaze over whenever conversation turns to horsey matters, it is perfectly believable to them that you had, indeed, discussed the matter before and that he simply hadn’t been listening…

Step 2: Have an alternative organised

Your non-horsey partner will now be feeling bleak and grumpy about spending yet another day standing in a field looking at identical looking women on identical looking horses, usually while clutching a variety of grooming items and having to put up with us being, lets face it, not our social best… This is where you have to have an alternative at the ready. For example: “But I think Manchester United are playing Chelsea today, and it’s live on Sky Sports [note: getting a Sky Sports subscription is absolutely essential to maintain partner happiness in horsey households], why don’t you stay and watch that, darling, if you don’t feel like going?” – And before you know it, you have the psychological upper hand for kindly putting up with your partner selfishly plonking himself in front of the television for the entire Saturday…

Alas, football matches do not take up nearly as much time as horse shows. There is only so far one can stretch the post-match analysis and interviews, despite the sports’ channels best endeavours. The best solution to this problem is to ensure your partner falls soundly asleep during the coverage and does not wake up until you return (my heartfelt thanks to the tv sports channels for their marvellous assistance in this by going out of their way to ensure post-match programming achieves a soporific tenor otherwise only encountered in bedtime stories). Stuff the fridge with enough beer to send your average bear into hibernation, and vast quantities of stodgy, high carb food. [advanced level: lace with ground up sleeping tablets]. Unless they are watching Formula 1, then absolutely no additional assistance is required…

The horse that’s not there

But all of that pales into insignificance when it comes to hiding entire horses. Which is more common than you think. I remember a friend at a recent social event talking loudly in front of her non-horsey partner about how she was reducing her number of horses from three to two, to make things easier to manage at home. Later that very same evening, when the non-horsey partners had reached (or possibly exceeded) their maximum level of horsey talk tolerance and formed their own Football/Rugby/Formula 1 talk corner, we were left to ourselves, talking breeding plans for the coming year. I turned to my friend and started to say: “of course, with you now only having the two mares…” – only to be interrupted by her: “What are you talking about? I have seven!”. – Now that, dear fellow horse fanatics, is advanced level non-horsey partner management in action! I have to admit, she is GOOD!

There are a few helping factors. For a start, to our non-horsey partners, all horses look essentially the same. Things that are glaringly obvious to us, such difference in bone, markings, or shape of head, are for some bizarre reason invisible to them. So a good start is to get a range of horses roughly of a similar colour (similar size, or indeed sex, are not necessary), they will never tell them apart…

Then make sure that your horses can never be seen all together in the same place at the same time, to make it as difficult as possible to count them. This can be tricky at home, but not impossible, as long as you avoid having them all in the stables together. It’s easier when you have access to a few different livery yards (ask for non-itemised livery bills, just in case).

Pretend it’s not your horse

In an emergency (say, your partner has developed a sudden and inexplicable interest in what is going on outside his front door – maybe the sky box froze? – and ventured into your yard at an inopportune moment, thus noticing that the one chestnut gelding he thought he owned was – in fact – 2 chestnut geldings and one chestnut mare…), simply pretend it’s not your horse: “Ah, darling, how lovely, you came out just in time to meet [insert name], she belongs to [insert name of horsey friend, of fictitious person] and is staying with us on lively, isn’t it marvellous?”.

I hope you found some of these ideas useful and helpful. As always, I very much welcome comments (particularly of other useful tricks, we can always learn more…).