A Pat on the Back 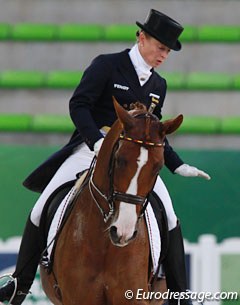 At the 2017 CDIO Uggerhalne, Australian Tristan Tucker got eliminated from the test after he patted his horse Jewel's Sir Weihbach behind the saddle and on the back during the final extended trot on the diagonal. Judge at C Gotthilf Riexinger based the elimination on the rule that a rider is not allowed to let go of the reins and ride with one hand. Investigation, however, revealed that no such rule exists and that Tucker's elimination could have been appealed.

The elimination caused quite a heated debate on social media with especially the animal welfarists rearing up as a rider got eliminated for patting a horse. They probably did not think that the rule was made to protect horses from poor riders who might have trained the horse with excessive, one handed whip use; those that release the rein and bring the hand with whip to the hindquarters of the horse for a beating; a despicable training method still seen at many dressage barns nowadays.

Tucker explained that he tried to relax and comfort his horse with that pat mid-diagonal (see video). Rules are rules when it comes to riding with one hand, or are they not?

Elimination Based on Which Rule?

Elimination can follow when a horse is lame, resistant for longer than 20 seconds, when a rider falls of the horse, when a horse jumps out of the arena with all four legs, for outside assistance (help by voice, signs), bleeding, abusive riding, late entry in the arena (90 seconds afte rthe bell), or for riding with non-permitted equipment.

The FEI Dressage Rules (Article 418) states that "Riding with both hands is obligatory at FEI Dressage Events. When leaving the arena at a walk on long rein, after having finished the test the Athlete may, at his own discretion, ride with only one (1) hand." Only in freestyle tests is it allowed to ride certain movements with one hand.

There is no rule stating that riding with one hand should lead to immediate elimination. A judge could subtract points in the "collective marks" for dropping the rein, but no other penalty has been prescribed in the rule book.  Riders often release the rein for a moment: to fix a jacket, position of a hat/helmet, to wipe nose/mouth/face for an itch, etc. It is clear that the FEI rules need clarification.

Internal Debate to Resolve the Issue 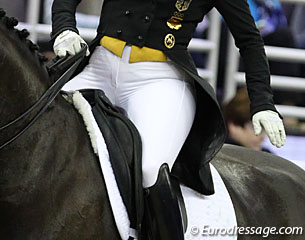 Eurodressage contacted Judge General Stephen Clarke, but did not receive any reply. Danish 5* judge Hans-Christian Matthiesen, president of the International Dressage Officials Club, was very willing to comment, even though he added that the responsible parties are the judge general and dressage committee and not so much the IDOC.

"The rule is not clear. Therefore you can discuss the elimination," Matthiesen told Eurodressage. "I have contacted Tristan and talked to the Judge at C (Riexinger) and explained him my point. IDOC has discussed it amoung the members, lively, and I have contacted the FEI dressage committee in a telephone conference - because I would like to have a guide to our members."

The vague rule has become a discussion point with the Dressage Committee and the DC will put forward a clarification to be valorized at the next FEI General Assembly where all new rules get approved for 2018.

"I think everybody agrees that we need to have it clarified in our rules," said Matthiesen. "We learn every weekend. That's how it should be. We are internally, taking care of the situation. It's up to us to help and guide the judges when the rules are not clear. If you leave too much to interpretation then it gets difficult. Remember we are not lawyers, we are only dressage judges doing this for free."

A few days after the publication of this article, Clarke replied that, "the current article 418 is presently under discussion internally within the FEI and a clarification will be issued shortly."