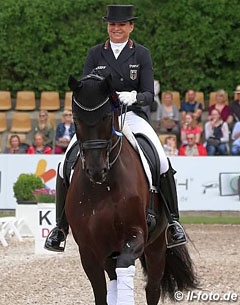 Following the 2017 German Dressage Championships in Balve, German team trainer Monica Theodorescu announced the team that will represent the home country in the Nations' Cup CDIO 5* in Aachen in July.

The 2017 CDIO Aachen is the second and last observation trial for German team selection for the 2017 European Dressage Championships.

Based on the results achieved in the technical championship (Grand Prix + GP Special) at the German Nationals in Balve, Theodorescu picked the four highest scoring riders for the team. Other team candidates will have to prove their worth in the CDI 4* tour.

Selected for the CDIO Nations Cup are:

Through recent scores at CDI's as well as in Balve, Helen Langehanenberg has been resubmitted to the German A-team with both Damsey and Suppenkasper.