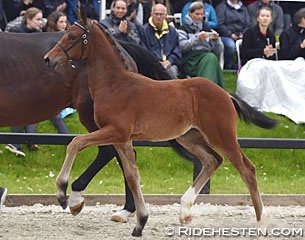 Faretti is bred by Henrik Hansen, the same breeder of World Young Horse Champion Fiontini. The fantastic mover sold for 150,000 euro to a so far unidentified Danish client.

The inaugural Nordic International Sales are an initiative of Andreas Helgstrand, organizer of Equitour Aalborg, and the Danish Warmblood society.

The second most expensive foal at the auction was Tophojs Ferrari (by Floriscount x Temptation). Bred by Anette Nilausen and Niels Jorgen Johansen, this colt sold for 60,000 euro to the Norwegian Grand Prix rider Cathrine Rasmussen. 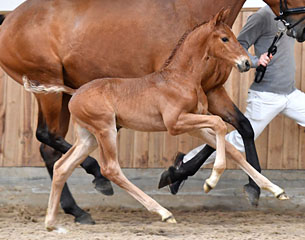 The third most expensive foal was Royal Flush S (by Revolution x Romanov), which sold to one of Revolution's co-owners for 57,000 euro.

The colt Francis Lightfoot (by Franklin x Michellino) sold for 33,000 euro to Canada.

Twenty-two foals were presented at auction of which twenty got sold. The average price for a foal was 34,525 euro.